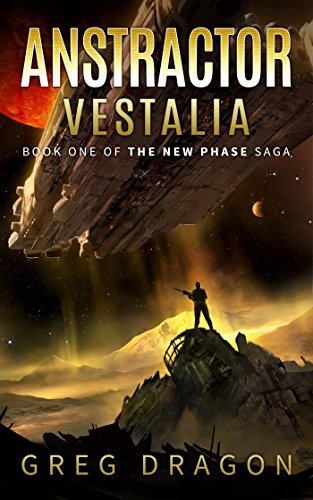 about this book: Anstractor Vestalia is the first book in the First Phase series. It details the childhood and rise of Anstractor's biggest hero - Rafian VCA. The setting is mostly on a space battleship, though there are many planets that Rafian visits. Anstractor has cloning, space battles, espionage, and many romantic elements including a deadly love triangle that pits two women from different galaxies against one another.

Influence and Appeal:
I wrote Anstractor after being influenced by my family to extend a short story that I had written (The Chronicles of Raf) into a larger novel. My audience thus far have been mixed, but the people who Anstractor seems to appeal to the most are lovers of Romance, action, and fantasy science fiction. Writing this book was a labor of love and the Anstractor Universe is massive and will take several novels to complete.

Cover:
The complete first half of Anstractor deals with a military academy. This is the foundation of what makes Rafian become the man that he becomes and it is what people will probably remember the book for--once they have completed it. For the cover we decided to show the front of Rafian's cadet jacket and show him pulling his trademark las-sword from a sheath. The las-sword is a central weapon to the universe and the story of Rafian VCA, so with these two elements we designed the cover.

If there is a second edition I will either have a painting done with Rafian fighting a Geralos for the cover or show a space battle. I don't think the cover I chose here is strong enough to represent the story.

Slightly slow at first but I was quickly hooked and couldn't wait to see what happened next.. the characters, especially Rafian, evoked extreme emotion out of me to the point where I was actually mad at his character and needed a break from reading! Phenomenal for a new author and I can't wait to see what he comes up with next!