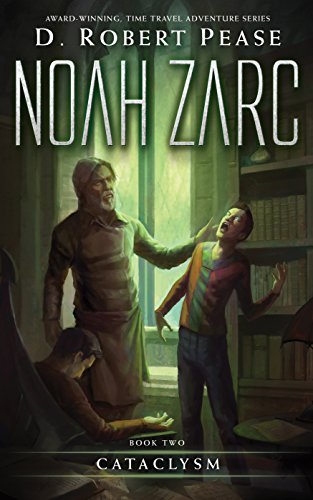 about this book: The second book in the Noah Zarc series ended up taking me in some surprising directions. I actually wrote this book before publishing the first book, and it was during the writing that I realized my main character, Noah Zarc, Jr. was actually a paraplegic. I didn't set out to write an "issues" book, he just screamed at me until I listened. After completing the first draft, I had to go back and rewrite the whole first book to make it fit. Noah's in a magchair (a futuristic hovering wheelchair) but that doesn't stop him from being a kid who always seems to get himself in trouble. Check out the blurb from Noah Zarc: Cataclysm, the second book in the Noah Zarc series:

Thirteen-year-old Noah Zarc rockets to Venus in a quest to learn more about his past. He refuses to believe his father is really the monster everyone says he is. Could there be valid reasons for everything he's done, including abandoning Noah at birth?

While searching for answers to secrets no one wants to talk about, even those that have remained hidden for over a thousand years, Noah becomes embroiled in a mission which could cause the greatest cataclysm in the history of the solar system. And the name, Noah Zarc, might be forever linked to the most devastating crime in humanity's existence, all because he was in the wrong place at the wrong time.