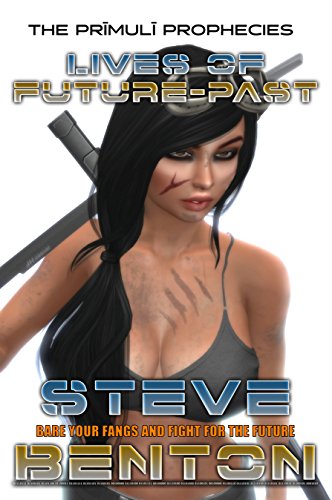 Book: Lives of Future-Past (The Chronicles of Max Gunnarsson Book 1) by S.K. Benton

about this book: In the 29th century, on a far-away human colony, Commander Max Gunnarsson breaks the law and goes to Earth, utilizing technology that he had invented under the auspices of his planet's military. But what he learns on the planet of his ancestors is something he would have never imagined.

Max is not only a lycan, but also a mage - a very powerful one, thanks to the father and grandfather he had never met. And further, a vile insectoid alien race is on its way to his home world, and they need to be stopped, as they already practically destroyed Earth (more like melted everyone). But first, he needs to go to the 43rd century to train up on some new skills so that he can stop them.

"The Chronicles of Max Gunnarsson: Lives of Future-Past" is the first installment in the Max Gunnarsson series, a sci-fi/fantasy universe created by author SK Benton. With elements of science, magic, supernatural beings and time travel, this all-new combined take on familiar subjects appeals to rennies, gamers, manga-heads, sci-fi fans and lovers of everything lycan (we're not so sure about vampire lovers, because vamps are really nasty, horrible smelly creatures in this universe).

The title, Lives of Future-Past, comes from where the denizens of the Rhönen Dominion live (where most of the action takes place) - they are in the 43rd century, but have a lifestyle more like those of the 6th century CE.

The people of Max's home world are a combination of Americans, Australians, Swiss, Peruvians and Argentinians, with Max being of Argentine extraction, known as a "dego". The English language has been peppered with Spanish and German words, and on purpose by the author, as he is fluent in both English and Spanish (and speaks some German). He also has homes in both North and South America, and has traveled extensively throughout South America and Europe (all descriptions of Lima, Peru and in Machu Picchu come from his personal experiences there). Components of online video games, such as a standard levels meter (strength, health, stamina) is part of a lycan's peripheral vision, and Max is limited by a skills timeout much like one encounters in any magic-based MMORPG. This adds a vulnerability to the protagonist and balances out his awesome, developing powers. It wouldn't be very much fun if a character could decimate the population of a planet with a massive fart now, would it?

Magic as a concept is handled in a completely different way than ever before (as far as the author knows), and finally a rational explanation is provided, explaining to the reader not only what magic is, but why it disappeared in the 6th century CE and faded off into legend.

Book #2 is already in development and is targeted for a late-summer, early-fall release on Amazon.

However, you will have to read Lives of Future-Past in order to learn the name of book #2 :)