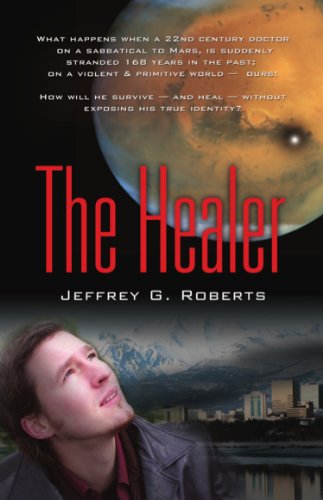 Book Review: THE HEALER - A Novel by Jeffrey G. Roberts

about this book: My book, THE HEALER, shows that human suspicions, fears and irrational hatreds will exist in 2181, just as in 2014. Dr. Reynolds Cully is from Santa Barbara, California, at a time when most diseases have been cured. So when he receives a Harvard grant to travel to Mars to research the physiology of an ancient Martian race, he is overjoyed. All the secrets of that long dead race is contained within the infamous and titanic edifice known as The Face on Mars. And he learns this race was exploring the stars when dinosaurs ruled the Earth. So he brings his wife and 2 children to live on Mars for a one year sabbatical. But while there a shadowy group called the Creation Purity Brigade, begins to spread fear and intolerance throughout the colony, claiming that any Martian artifacts unearthed are sacrilege, and an affront to the one God of Judeo-Christian beliefs. There are no Martians in the Bible, they claim. Soon, they become not just philosophical, but violent. It is at this time that a strange machine is unearthed in The Face - an ancient space/time machine the Martians used eons ago to explore with. And Dr. Cully is awarded a 2nd grant, from the NSF, to use it to travel to Earth in the year 2013, and try and solve a centuries-old mystery: the cause of The Great Alaskan Plague of 2012.He travels to Anchorage in 2013, and eventually does solve the medical mystery. But while on Earth, the CPB terrorists in 2181 Mars - have destroyed the ancient space/time machine! He is now stranded 168 years, and 150 million miles from his home and family; in a primitive & dangerous world - ours. How will he survive now? And how can he heal using 22nd century science - without being detected - or inadvertently altering the course of history in the process? But he cannot allow people to suffer, if he has the means to cure them, regardless of the consequences. He has no choice. For he is- THE HEALER.

It took me about a year to write, with extensive research on Mars, and medicine progressed into the 22nd century. The title was easy. The cover shows Dr. Cully in 2013, staring longingly at an imagined image of Mars, while the skyline of Anchorage is behind him.

Exciting mix of time travel, exopolitics & wondrous descriptions of the ancient structures on Mars! I found intriguing the author`s concept of a "Creation Purity Brigade", who tried to extinguish scientific discoveries that humans once existed on Mars!