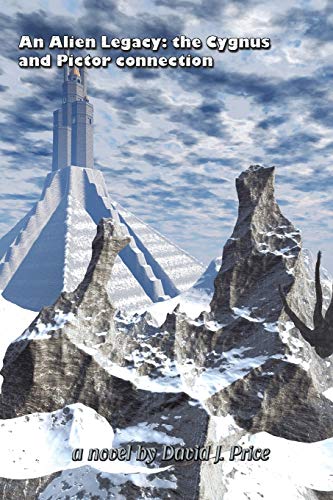 Book: An Alien Legacy - The Cygnus and Pictor Connection by David J. Price

about this book: My book is about an alien race from the planet Oceanid, orbiting the star Quaestor Minor in the Cygnus constellation. The planet is part of a three world solar system and is predominately a water world with six islands and six autonomous city states with an overall population between them of only 15,000. Hence control of the population is rigorously controlled under 'The Zero Procreation Legislation' written into the City States Constitution. Otherwise life seems idyllic. Yet the people have a race memory of the Ancestors colonizing their world, where a civilization developed with elegant cities until catastrophe happened with a comet colliding with their world and flooding it. The long road to rebuilding civilization has already happened at the start of the novel and the City States have developed space travel and visited near star systems. For decades now, dissenters in their society have lobbied the six City State Councils to refocus the core objectives of their Space Program to building star-ships, their destination, to explore the source of their origins in the Pictor constellation 642 light years away from where they believe the Ancestors originated. A fleet of starships are built, faster-than-light drives are still beyond their science, but they have developed Catalytic Nuclear Interstellar Ramjet engines that should attain 98% the speed of light and with time dilation drugs and suspended animation, they believe they can make the 642 light year journey to the Pictor constellation. The flag ship is never fated to get there, damaged it has to crash land on an unknown planet and establish a colony. Their May Day signal is never answered. But they become instrumental in leaving a legacy on a nearby world. An immortal omnipresent entity acts as narrator in keeping the story alive over 40,000 years and determines to motivate the Ancestors to investigate the crash site and return to the Cygnus constellation and the seed colonies they abandoned 1.68 million years before, but the Ancestors had their reasons and have to experience the terrors of a parallel universe to return to face their moral responsibilities.

The book offers the reader a good yarn, not in the usual 'galactic wars' vein, as an avid reader of science fiction myself I tire of that type of story line so I wrote my own. The primary readers of my book would be those who enjoy science fiction.

The book took 12 months to write full time over two winters. I planned out the plot pegging the story line on important events in the news in 2012, imagining how events would pan out in our near future. I came up with the title as the Hubble telescope was identifying possible habitable exoplanets in the Cygnus constellation at that time. The hardest part of writing my book was picking up the threads after a summer relapse, also some events had been discredited and didn't hold the same importance. I altered the original pessimistic ending to one offering more optimism for that near future. I did much research to make technical details believable in extending space projects announced in 2012 to their ultimate conclusion. What I learned from the experience is that writing a book is hard work, takes commitment and self-publication does not cover your investment costs. It is a labour of love and perhaps a vanity project to see your words in print. Then the task of promotion is with you which prompts my reasons for writing this. I would like your readers to purchase a copy, read it, enjoy it and benefit from the effort I put into this project. Give me encouragement to write another novel.