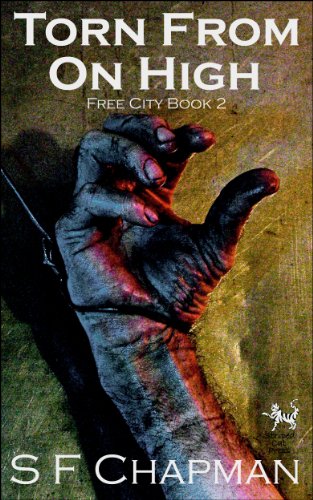 about this book: It was quite clear to me as I finished up work on the Science Fiction Action/Adventure novel "The Ripple in Space-Time" that the amusing and often horrific exploits of Inspector Ryo Trop, Lieutenant Zmuda, Jasper, Mixion and especially little Dilma should be continued. All three of my longtime editors also clamored for more tales from Free City and the moldering feudal fiefdoms beyond.

Shortly after "The Ripple in Space-Time" was published, I wrote "Dreg's Scamp" as the first chapter for a possible project with the irresistible title of "Torn From On High." At the time, I was uncertain as to how Nate Briggs' most gruesome death would fit into a story or whether it would even include any of the characters from "The Ripple in Space-Time." But the chapter and the book title just begged to be fleshed out into a story.

If by chance you have not yet read "The Ripple in Space-Time" which is the first book in the Free City Series, may I suggest that doing so will greatly increase your understanding of the characters in the series and the gritty post-apocalyptic world of 2446.

It is a dark and gritty Film Noir-like world with danger and scoundrels skulking around every corner. Nearly all humans on Earth and beyond live in subjugation as serfs or slaves under the domination of a few corrupt Warlords.

The exception is the small autonomous zone of Free City at the northern end of the Shannon River valley in what was once known as the Republic of Ireland. Free City could easily be mistaken for twenty-first century London, San Francisco or Manhattan. Although it has the typical ills of all metropolitan areas, Free City is the sole bastion of Law, scientific research and progressive thinking. By long standing agreement with the Warlord Syndicate, the Free City High Court tends to all judicial matters. The Registry Bureau regulates motor vehicles, boats and ships, aircraft and spacecraft. The Free City Inquisitor's Office, a future version of Scotland Yard or the FBI, is often called in to investigate difficult crimes wherever they occur.

The Free City Series follows many of the cases that Inspector Second Class Ryo Trop, the Inquisitor's Office's most talented cop, has undertaken.

As a counterpoint to the action, I have included several News Items from 2446. These short articles are often written in what would now be called a sensationalized tabloid style with the heavy-handled use of adverbs and adjectives. The News Items sometimes provide subtle clues for readers who like to "solve" the crime before the protagonist does.

Please enjoy "Torn From On High."

Video: SF Chapman about his quest to write 12 novels in 5 years