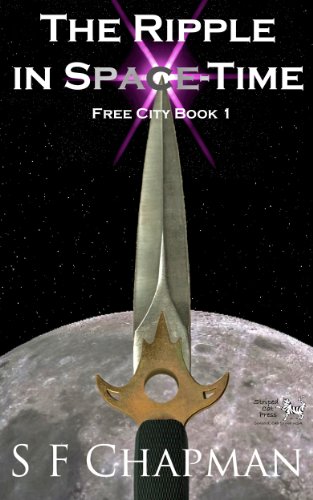 Book: The Ripple in Space-Time (The Free City Series) by S. F. Chapman

about this book: When the huge Ultra Energy Research Laboratory in the Sea of Crises on the Moon is destroyed by a mysterious blast, Inspector Ryo Trop of the preeminent Free City Inquisitor's Office is called in to sort out who was responsible for the disaster.

Early press reports suggest that rogue moon miners are to blame but Ryo quickly discovers that a far more complex and sinister scheme is afoot.

With the help of faltering Grad student Lev Fesai and Liaison Agent Keira Norton, Ryo searches for clues and the culprits in the corrupt feudal fiefdoms of the Warlords that dominate human affairs following the savagery of the Second Amero-Asian War.

Ryo's longtime friend, Biology Professor turned spy Malcolm Evans, suggests that the wave of space piracy that has vexed the Solar System is connected to the obliteration of the Lunar Lab.

But why would reckless and marauding space raiders have an interest in a research lab?

The trail winds through the rundown and sleazy remains of Dublin to the Advanced Physics Department basement at Free City University and finally to the Asteroid Belt in search of exotic stolen antimatter. Along the way, a megalomaniac Warlord destroys a huge African city, a student led revolution instigates change for the good of all, a band of amateur assassins and an eleven-year-old slave girl change the course of history and two vicious pirates plot to blackmail humanity.

Set in the moldering and corrupt world of the Warlords in 2445, many seemingly unrelated forces come together to force off the tight noose of tyranny that has slipped around the neck of humanity.

I wrote my fourth novel The Ripple In Space-Time as a Film Noir-inspired Action/Adventure Detective story of people breaking free of oppression and struggling towards a more ideal and equitable life for all.

Video 1: SF Chapman about his quest to write 12 novels in 5 years
Video 2: Author S.F. Chapman discusses his novel 'I am here to help.'