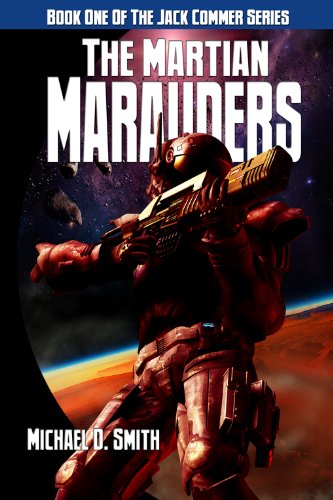 about this book: In 2020 inexplicable solar system disasters force a panicky acceleration of space technology and weaponry, and in the unraveling history that follows, Captain Jack Commer of the United System Space Force is ordered to drop the planet-wrecking Xon bomb to end 2033's Final War. The remnants of Earth's population are quickly evacuated to Mars, but somehow the USSF has overlooked an intelligent Martian race which is extremely displeased at the arrival of two billion shellshocked humans.

My science fiction novel The Martian Marauders was published in 2012 by Double Dragon Publishing, but the somewhat dysfunctional Commer space pilot family and the history of the 2033 evacuation of Earth have actually been with me since childhood. In the eighth grade I got through 110 handwritten pages of a novel called The Martian Marauders, basically a Hardy Boys adventure set in space. But halfway through I became bored and abandoned the book, leaving Captain Jack Commer and his brother Joe hanging in the ventilation shaft of a Venusian prison for the next twenty years.

By the time I'd begun writing novels as an adult, I'd long ago dismissed my numerous Jack Commer stories as kid practice. But when I ran across the aging handwritten manuscript of The Martian Marauders I knew I had to spring the Commer boys from Venus. A fresh Part Two allowed me to explore some current life themes as I glibly explained away the scientific ludicrousness of the kid's version, inventing whatever was necessary--the EnviroFields required for survival in the open Martian environment, the destructive power of Amplified Thought, and one-way Martian telepathy. And of course "the boys" were really men with romantic urges, and the brainwashed planetary engineer Amav Frankston arrived to torment Captain Commer. The quick and easy output, the fun of new plotting, was a turning point in my writing. So naturally I had to go back and fully rewrite the eighth grade Part One, bringing it emotionally up to date but keeping the outrageous kid plot intact--well, most of it.

So … by June 2034 the native Martians have risen in rebellion, led by their new emperor, Sam Hergs, a traitor to the human race. Jack and his three brothers soon find themselves in the deep desert battling Martian insurgents armed with shatterguns that crack their victims into millions of jagged pieces of glass. Then Jack compromises the entire mission when he falls in love with the Martian emperor's beautiful brainwashed consort.