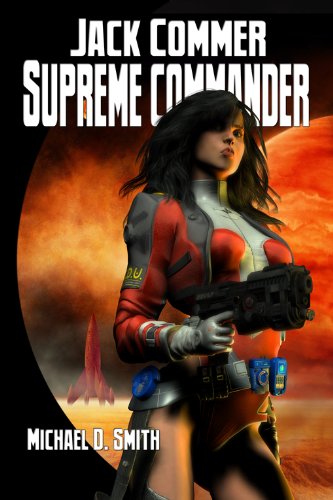 about this book: Jack Commer and his new wife Amav embark upon a mission to seek peace with the fascist Alpha Centaurians, but their marriage begins unraveling as Jack, recently promoted to Supreme Commander of the United System Space Force, succumbs to the pressures of his new command and his crew inexplicably converts to worship of the Alpha Centaurian Emperor.

Jack Commer, Supreme Commander came as a quick sequel to the first draft of The Martian Marauders, and I had a lot of fun exploring the embarrassing ramifications of one-way Martian telepathy, Ship's Engineer Phil Sperry's hopeless infatuation with Jack's wife, and Jack's desperate order for the remaining sane people to keep diaries so he could track the moment when they were brainwashed.

But both books remained in draft form as I moved onto other novels, and I didn't begin to think of them as forming part of a trilogy until the Commer universe invaded my novel Nonprofit Ladies, retitled Nonprofit Chronowar when it turned into science fiction and eventually became the third published novel of the series. Nonprofit Chronowar set the first two novels on their heads and demanded thorough revisions of each.

There are only four settings in Jack Commer: the doomed Typhoon II spaceship, its attached Pod for high level negotiations with the enemy, the Emperor's Receiving Hall, and the deserts of the torture planet. The novel would be easy to stage as a theatrical play; I can see the characters declaiming their fears and desires within those spaces. The first chapter, in which everyone is frazzled by Star Drive and Lt. Borman's insubordination almost leads to his execution at Jack's hands, is great comedy, yet also foreshadows the failure of the mission. But Jack does find a resolute core which leads to his eventual triumph.

After an engine explosion strands the Typhoon four months from its destination, the crew encounters a derelict spaceship. Its insolent, uncooperative human refugees proceed to brainwash the entire crew except for Jack and Amav, now estranged, and the emotionally damaged twelve year-old refugee Bobby. These three, along with recently converted ship's engineer Phil Sperry, write their final, brutally honest diary entries just as the ship is captured by Centaurian stormtroopers and Jack and Amav are sent to be tortured on a barren planet.