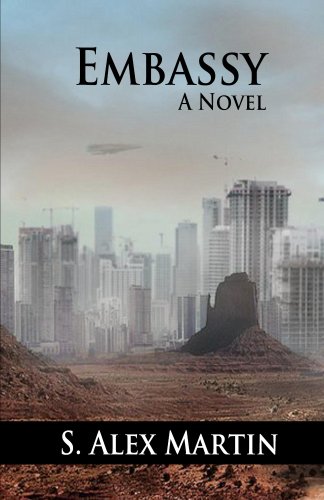 about this book: "Embassy" is the story of Arman Lance, a boy who is in love with Ladia Purnell, a girl who lives across the galaxy. He's become obsessed with finding her again, so much so that he has pushed away his friends and mentally isolated himself from the world. He joins the Embassy Program to embark on the expedition to Ladia's planet. It isn't long before a fellow Recruit, the adrenaline junkie Glacia Haverns, decides it's her job to coax Arman out of his miserable mindset and show him that there's more to life that chasing desperate dreams.

• "Arman reminded me a little of Holden Caulfield, not sure of his agenda, and too full of teenage angst to ask for or accept help." — Cathy S.

• "This story is about character growth. In the beginning, Arman is not extremely likable... It's about him learning to be a happier, better person." — Heather M.

• "The story has a very strong sci-fi setting, but the introduction to this future comes at a good pace, and never leaves you overwhelmed." — Nate M.

• "Arman was a jerk at the beginning of the book! Arman would put himself down and not live up to his full potential just so he could stay in his comfort zone, but afterwards, he began to grow on me and I had respect for him." — Catherine C.

It took me 10 days to write the first draft of "Embassy," which was 151,653 words. Over the next year, I edited eight drafts down to 77,000 words with the help of Beta Readers and a critique group.

The title is representative of the world I establish in the book. The book is futuristic -- it takes place in the year 4319 -- but I think I developed a very realistic world. Joining the Embassy has been Arman's goal ever since he met Ladia, so all his motivation is in reaching this one thing, and the story picks up just as he enters this Program. It sounds like a lot of politics, but it's not. I stay on the character-driven, fun, emotional side, and politics are just built into the background.

This cover was perfect because it is EXACTLY how the setting of the Embassy is described. Undil, the planet where Arman lives, is a desert similar to the southwest United States. The Embassy city is built right in the middle of nowhere, with canyons and mesas and barren plains all around it. Later in the book, there is a month-long journey across the galaxy that takes places on a space station, as well as another planet full of life and color that is plagued by its own desert, which is slowly destroying the planet and turning it into a wasteland.

You'll find a lot of real-life astronomy mixed in with the fictional astronomy.

Writing this book helped me mature 100-fold as a writer. I solidified plot points, learned to develop characters on a personal level, and integrated the world in a way that it actually influences the characters. Without the world, this story would not be possible.