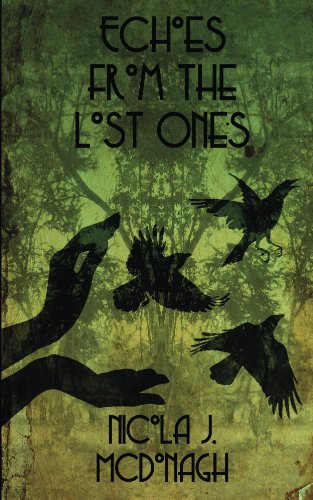 Book: Echoes from the Lost Ones (Song of Forgetfulness) by Nicola McDonagh

about this book: Echoes from the Lost Ones is about survival in a time of want. The story follows the journey of seventeen -year old Adara, who has a special gift. She is a Bringer and can sing to the only edible creatures left, the birdybirds and make them land. In a world were meat is just a memory her talent is much sought after. When the Agros cut food supplies and children go missing, Adara must leave the comforts of her hygiene home to search for her kidnapped brother.

The book came about due to a challenge from some pupils that attend a creative writing group I teach at my local High School. They asked me to write something for their age group that included subject matters that they were concerned about, such as overpopulation, rapid advances in technology and global warming. The book is set in Scotland because oceans have risen and that is all the land that is left in Great Britain. There are no animals because of viral infection, except for the elusive birdybirds and they never land.

I started by researching the meaning and origin of Celtic, Anglo Saxon and Roman names to help me give personalities to the characters for the story. When I found the name Adara, it said: Catcher of Birds. For some reason that appealed to me and I began to imagine a future world where birds were scared to land. After that I came up with other characters and based their personalities on the definition of their name.

Once I had the characters in place and a rough idea of when the story would take place, I began to jot down possible scenarios for my dystopian plotline. After researching about technological advances such as 3D printing, super strong-lightweight materials, and 'invisible cloth', I came up with several ideas for inclusion in the book. Adara's invisible super lightweight Synthbag and self replicating Sterichoc, to name but a few.

Although I did have rough chapter outlines, I found that once I started writing. A lot of the book came about with just me writing down a chapter heading such as, Rough night amongst the Nearlymen, and letting the characters 'tell' me what happened next. It was a lot of fun to let go and just allow my imagination to flow.

The cover idea came from Adara. She has this special gift of calling to the birds and the birds never land, so that image of birds/feathers and hands just seemed right for the books message. Also, I wanted a suggestion of trees and a sense of density of woodland to create a feeling of another world/timescale.

In 'Echoes,' I am trying to suggest that if mankind continues to abuse this beautiful planet, then a world like the one I have created might happen. But I am also trying to say that we are all connected somehow, and that we all have something special inside us, even if we aren't sure what it is. That we are all capable of doing something amazing if put to the test.

• 'Addictive and engrossing-. It creates its own unique world where there's danger, and fear, and regret, but where there is a barrel load of humour, too…'

• 'A great story full of fun wordplay, great imagery, and an underlying commentary about the frailties of mankind.'

• 'A story of trust and faith "Echoes from the Lost Ones" is an adventure that takes you to a time and place like no other.'