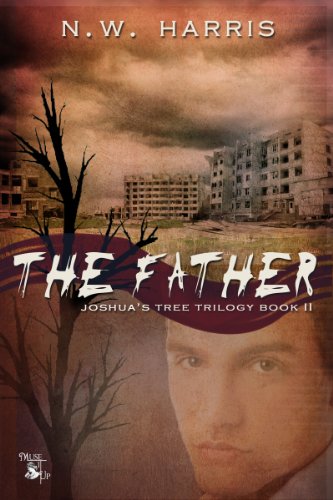 about this book: The second book in the "Joshua's Tree Trilogy by N.W. Harris," "The Father" picks up after the cliffhanger ending in book 1, with Joshua being held prisoner by the leader of the sweepers. In this book, Joshua suffers greatly as he comes to grips with his identity. He learns the only way to stop the sweepers is to take charge of a large contingent of them and try to start a civil war. At first disgusted by his new role, he begins to struggle against a growing addiction to power.

"Bound by his dark destiny, Joshua must become the master of Nadia's sworn enemy to save her life."

Nadia and the Atlantians chase Josh across the land hoping to save him. After loosing track of Joshua, she is reunited with her people. "The Father" gives us a chance to see the struggles Nadia deals with in her tribe, where most of the people believe females should not be warriors. Nadia grows into a strong and confident leader over the course of the story, but she will suffer a devastating blow to everything she has come to believe in the end.

"Joshua's Tree" (book 1) has received numerous good reviews on Amazon.com, GoodReads, etc., and I hope my readers will enjoy book 2 in the trilogy even more. Here is the blurb:

"After discovering he's destined to annihilate nearly all life on the planet, Joshua must take charge of a cannibalistic army of mutants with hopes of starting a civil war that will end the reign of evil—or bear the responsibility for destroying the few good people who remain on the planet.

Captured by the leader of the sweepers, Josh learns he will grow up to be a genetic engineer responsible for creating the flesh-eating monsters. The Father recruits him to lead an army of sweepers against the evil generals who resist the termination of the sweeper experiment originally designed to bring an end to a global war that threatened to render the planet uninhabitable. At first repulsed by his telepathic ability to control the sweepers, Josh becomes addicted to the power to control thousands of the creatures at once. Believing him dead, Nadia rejoins her people, where she struggles to gain respect while leading them to safety. Inadvertently pursuing her across the land, Josh may not be able to stop his sweepers from destroying Nadia and her dwindling tribe when they collide in battle."