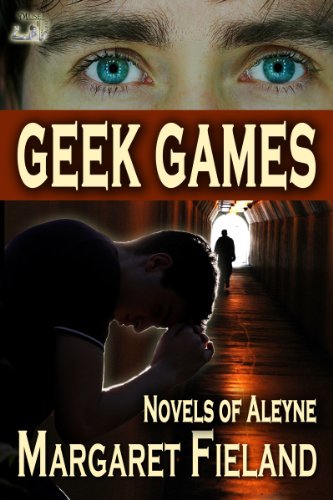 about this book: Geek Games is the story of a boy who makes a big mistake, one he can't correct, and how he goes on with his life. The main character, Martin Samuels, appeared as a secondary character in "Relocated," the first Aleyne novel. I wrote "Relocated" for 2010 NaNo (National Novel Writing Month) because I wanted to overcome my fear about science fiction world creation. Then, for 2011, I wanted to write another novel, and decided to write about Martin.

When I wrote "Relocated," I didn't intend to write more about Aleyne, so no planning for furthur stories was in my mind. Martin was friendly to Keth, the main character in "Relocated," but he had serious flaws, too, and behaved badly to Keth on several occasions. Because of this, he had more flaws than Keth, and in my opinion ended up being a more interesting character.

The characters, as is apparently the case with all my novels, surprised me. Martin turned out to be gay, and fell for one of the other characters in the book. Another character, a political conservative, whom I had initially pegged as a bad guy, turned out to be anything but, and the romance between Martin and Beram didn't turn out the way I'd thought it would either.