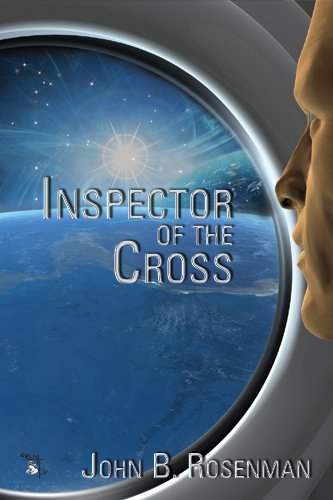 Book: Inspector of the Cross by John B. Rosenman

about this book: I love noble galactic heroes, and I first wrote Inspector of the Cross over twenty-five years ago. I almost sold it to a major publisher but not quite! I let it sit for twenty-three years and then dug it out and completely revised it.

As it turns out, Inspector of the Cross is the first in a series. I've already published a second with MuseItUp Publishing (Kingdom of the Jax), and a third is on its way. Inspector of the Cross tells the story of a five-thousand-year-old war between the human race and a seemingly invincible and heartless alien species, the Cen, who seek our destruction and who have won virtually every battle and brought humanity and their empire, the Cross to the brink of annihilation. Only one person can stop them, Inspector Turtan, an elite and peerless agent who is technically over 3500 years old because he has traveled in suspended animation on ships to distant worlds in order to investigate reports of weapons or devices which might enable humans to turn the tide against the enemy.

Now, at long last, he has found such a device, one that can defeat the Cen and save his species. Unfortunately, a deadly, beautiful woman stands in his way.

So far I'm in the third book of this series, and I find it immeasurably exciting. I hope the reader will as well. I hope it appeals to those who like action/adventure, interesting and unusual aliens, beautiful and unpredictable women, black holes or singularities, and who are interested in the inexhaustible wonders of the universe.