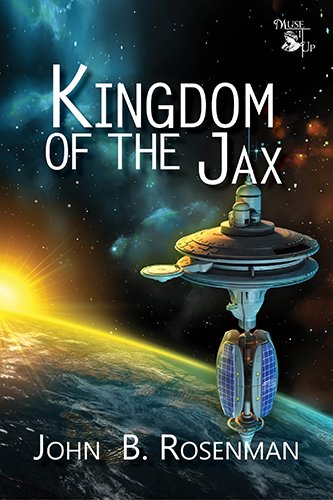 Book: Kingdom of the Jax (Inspector of the Cross) by John B. Rosenman

about this book: Kingdom of the Jax is Book II of the Inspector of the Cross series, and it follows Book I, Inspector of the Cross. I wrote this book raw, without a writers group or any input, except for a friend who used the word "bats" and my wife Jane who used the word "lice." Readers of the novel will see the relevance of these words once they get into Inspector Turtan's continuing story. Otherwise, it wasn't until MuseItUp accepted the novel and my editor Chris Speakman got hold of it that the novel received the benefit of any editing and then to my surprise, not very much.

This novel was fairly easy to write and in many ways a delight. Also, a surprise. I introduced some new characters, or rather, some new characters just walked or swam in, including fourteen-year-old Sky Masterson who will play an increasing role in the series, Kit Killer, and nearly ten billion Radiants. Turtan, as always, continues to fight the good fight. He has overcome the despair and death wish of Book I, and I hope the science fiction and fantasy readers, for whom this series is primarily intended, will grow more enthusiastic as the series progresses. One thing I learned is that being a pantzer or making it all up as you go along, seems to work for me. Yes, there are dangers and difficulties. Not having an outline prepared in advance means you overlook and don't anticipate certain things, but there's also the wonder, excitement, and fun of surprise. I never knew the Radiants would play such a growing role in this book and the next one, for example, or that the girl Sky Masterson would, too. What an impact they have on the plot and story-line!

Kaytalin Platt's cover is wonderful for this book; it suggests the sense of wonder, awe, and majesty of the universe. I hope the reader feels that in the novel, but I also want them more than anything else to identify with the great yet tormented hero who strives like Christ and uses all his enormous skills and gifts to save humanity.