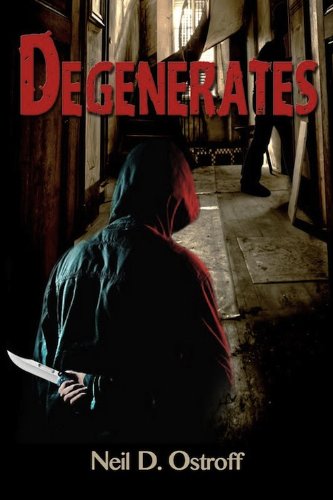 about this book: Be prepared to be afraid.

Each degenerate overcomes incredible obstacles working in a restaurant named City Café until a psychotic co-worker changes everything about their lives.

I was raised in the Chicago area in the 1950s when Riverview Amusement Park was in full swing. They had a roller coaster called The Bobbs that was made of wood. It shook as if I were sitting on an erupting volcano. At one point it headed straight for a 12x12 solid beam, which I was sure would decapitate me. Just before my head was to leave my body, the car dropped like a lead cannon ball, leaving my stomach to confront the beam. As I read Ostroff's novel Degenerates, I was back on The Bobbs headed into the beam. Whatta ride!

In the Prologue little Tommy Fielding watches his father blow his mother away with a shotgun, and then is forced to watch his father kill himself with the same shotgun. At that point I knew that Tommy was not going to grow up to be a choirboy and that the rest of the pages would be bloody.

Chapter one, twenty years later, Tommy, encouraged by Jeffery who is a huge Great Dane residing in the boy's mind, kills and savagely mutilates two women because Jeffery convinces him that killing makes him stronger, makes him God and eventually he will have the power to bring Mommy back to him. Thus, Ostroff had me by the throat and I could not get away.

Tommy is the key degenerate in the story who is an infamous serial killer terrorizing Philadelphia. Ostroff skilfully leads his characters to the City Cafe where the horrifying culmination takes place. Along the way we meet the other degenerates.

There is Astor, an astoundingly beautiful young woman who escapes a brutal marriage to a young medical student, Darrel, but carries with her grief from the death of their child, which he seems glad to have lost. Ironically, Astor was Tommy's first girlfriend, and she is still in love with him.

Emily comes from a home where her mother is a fanatic Christian who drives the girl away. She turns to cocaine for which she will do literally anything to get. Only seventeen when she leaves home, Emily is a true tragic figure whom Ostroff draws beautifully.

All of his characters are drawn with skill. Ed Kirkpatrick, a writer who crawled inside a bottle of booze years before we meet him, winds up cooking short order at City Cafe. Astor and Emily find their way to the restaurant to wait tables, and Tommy is hired as dishwasher.

At the restaurant we meet Judy Forester, a sixty-year-old woman who bosses the front of the cafe and who remains grief stricken over her husband's death twenty years before.

Matt runs the kitchen. He seems to be a combination of compassion and skill whose expertise is vital to the success of City Cafe.

Into the mix comes Aaron, a young policeman who is working his first CSI case and learns that experienced officers around him are worth listening to.

Degenerates is a very worthwhile read. Ostroff's prose is crisp and clear; there isn't a boring page in the book. I will warn anyone who finds violence repugnant to pass this one by. But any writer who wants to experience great prose and well-sculpted characters should make Degenerates a must read.

Other books by Neil Ostroff (more)