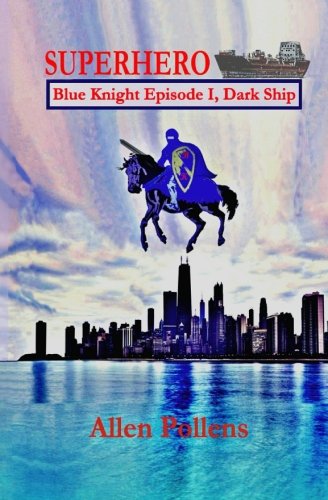 about this book: "Dark Ship," First Stand-Alone Episode in New Sci-Fi-Fantasy Series, Is Now Available in Paperback (Only $5.99) and Kindle eBook ($2.99). Author Promises to Publish All Seven Exciting Episodes.

Author Allen Pollens explains: "I wrote these stories as standalone but related stories and decided to offer them to readers in this way. This allows them the option of picking and choosing inexpensive individual episodes ... perhaps

"SUPERHERO Blue Knight Episode I, Dark Ship" debuts the new series with Blue Knight challenged by a thief's demand for ransoms of stolen world art he has stored on board a dark ship on Lake Michigan. The wily criminal's unexpected preparation for the Blue Knight's arrival catches Superhero off guard and provides him, and his alternate identity, Roger, with plenty of time to ponder the situation. He is no immediate danger and friends are on the way. Blue Knight/Roger's mind drifts off to remembering all that he experienced after leaving the farm in Nebraska ... the new friends at Rosie's Rooming House, the bookshop, the wizard, groping for an understanding of his new Blue Knight powers. While temporarily thwarted, Roger/Blue Knight is determined to live up to the oath of conduct to which he swore when dubbed Blue Knight. For the time being, all depends on Frank and Ned and the others at the rooming house.

This is author Allen Pollens' seventh sci-fi-fantasy offering in less than three years and one of 10 books he has published. Pollens' other books in this genre include: "ALTERNATIVE LIVES - To Sleep, Perchance to Dream ... Another Life," "CONJUROR - Living the Tale," "CREATOR - Apocalyptic Sci-Fi Epic, Earth's Human Behavior Confronted," "CREATOR II -Human Behavior Explored," "SUPERHERO – Chronicles of Blue Knight Adventures," and "THE LOST PHARAOH, – Sobek II."

Allen Pollens is retired from careers in software/hardware design, and high tech sales and marketing. He has been telling stories his whole life. The ones he wrote for his grandchildren became the basis for "BOFFO BUTTERPHANT - Small Creature Adventures," and "STARFISH CHRONICLES – Undersea Adventures with Sammy Starfish." He also turned the daily journal he kept on his European vacation into "Al's London and Dublin Holiday," published in full color, with ninety photos.

For more about "SUPERHERO Blue Knight Episode I, Dark Ship" and Al's other books, contact Allen Pollens at 503-407-2850 (cell), via email at either apollens@comcast.net or s.teller@comcast.net. Also visit website http://StoryTeller-Spot.com