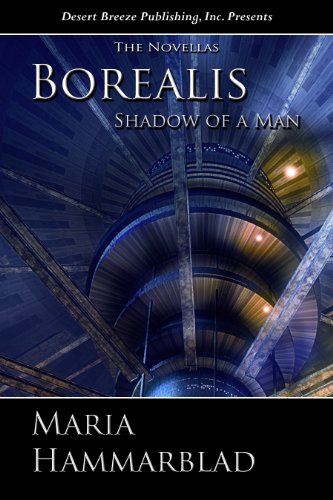 Book: Borealis XII - Shadow of a Man by Maria Hammarblad

about this book: Borealis is an old and decrepit space station that houses all sorts of cruelty. There might be a place in the universe Theresa fears more, but she can't think of one. Particularly since Borealis is run by the Trans Planetary Protectorate; the less than benevolent government in her part of the world. To make matters even worse, her husband Dominic was imprisoned, drugged, and tortured on Borealis. He returned a mere shadow of his old self, scarred both mentally and physically by abuse and Uudon withdrawal.

Why they left home to go to this place boggles her mind. Dominic might have his reasons, but it is the last place she wants to go, and the only one she can't escape. Dominic's apparent madness does nothing to alleviate her fears. Her once sweet husband has turned into a womanizing monster, and will destroy anyone who gets in his way.

Captain Giovanni is Theresa's faithful and all too handsome bodyguard, and he appears to be the only one on her side. He once helped rescue Dominic, and pays for the insurrection with a lifetime on the run. This might be a situation not even he can handle, and Theresa fears none of them will make it out alive.