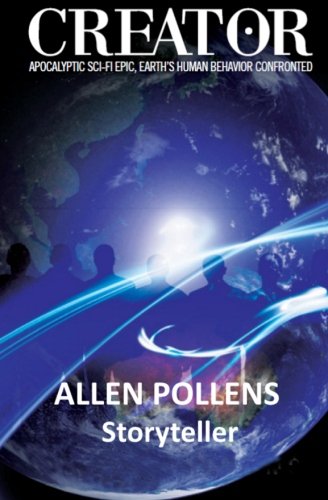 about this book: "CREATOR" & "CREATOR II" - SCI-FI for FREETHINKERS from ALLEN POLLENS

"Both science-fiction books carry strong philosophical messages," advises Pollens. "'Creator' and 'Creator II' are ideally suited to readers who are open to new ideas on religion. Finally," he says, "challenged readers can always view the stories as only being science-fiction."

In "Creator - Apocalyptic Sci-Fi Epic, Earth's Human Behavior Confronted," Overseers of the Universes threaten the end of humankind if Earth's people do not alter their conduct. They summon university Professor Thomas Scribner to witness the court's inquiry as they hold an eighth Guardian, Earth's creator, accountable. Creator tells his story from the beginning. A debate ensues, which results in Scribner accepting a mission to try to save humanity. He delivers Creator's message to humans in a book titled "Words of the Creator." He recruits others to help him in his 25-year effort. They become close, marry, have children, and address family issues.

In "Creator II – Human Behavior Explored," Professor Jeffrey Lerner participates in a second Guardians' meeting to discuss how to better understand the behavior of Earth's people. Lerner agrees to study negative historic conduct. He must submit his findings by October 19, 2024. Earth's Creator grants Lerner ability to time-travel into the past. Lerner's research is approved by the university's administration and they allow him two student assistants. The trio begins by seeking study areas composed of sizeable populations. They settle on two: the Abrahamic religions (Judaism, Christianity, and Islam) and male domination of women. With this as a basis, Lerner travels back in time to speak with the people who changed the world.

"Creator" and "Creator II" - are available at Amazon.com in paperback for $14.99 each, $6.99 for Kindle eBook ... search title and author name. Available from other sources as well.

These are two of five Allen Pollens' science-fiction offerings in a little more than two years. Pollens' other sci-fi books include: "Altenative Lives - To Sleep, Perchance to Dream ... Another Life," "Conjuror - Living the Tale," and "The Lost Pharaoh - Sobek II."

Retired from careers in software/hardware design, and high tech sales and marketing, Pollens has been telling stories his whole life. The stories he wrote for his grandchildren have become the basis for "Boffo Butterphant - Small Creature Adventures," "Starfish Chronicles – Undersea Adventures with Sammy Starfish," and for "Superhero – Chronicles of Blue Knight Adventures." He also turned the daily journal he kept on his European vacation into "Al's London and Dublin Holiday," published with ninety color photos.

For more on "Creator," "Creator II" or Al's other books, contact Allen Pollens at 503-407-2850 (cell), via email at alpollens@comcast.net, or go to website http://StoryTeller-Spot.com.