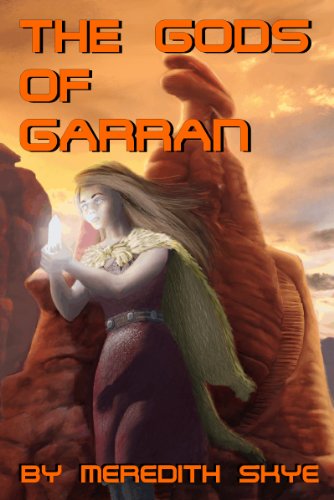 Book: The Gods of Garran by Meredith Skye

about this book: On a harsh desert world, two cultures clash against each other. One is the original inhabitants of the world Garran. The other is an advanced alien race known as the Chanden who conquered the world a hundred years ago. Tired of oppression, a group of Garrans rise up to search for the ancient god-stones that contain the essence of their gods: the Borrai, which were all destroyed when the Chanden invaded. They believe that if they revive the Borrai, they will help them force the Invaders off their world.

The story follows a young man named Moorhen, of the Sand Plain Clan, who follows his father, the chieftain, and their tribe against the Chanden in retalliation for the death of his little brother at Chanden hands. Moorhen suffers a moral dillemma at the idea of violence against innocent beings.

The other main character in the story is a young woman named Este, a Chanden Enforcer, and daughter of the main Chanden military commander on Garran. She Goes under cover and accompanies the group that is searching for the god-stones. She begins to doubt the Chanden's right to rule Garran. When she finds the god-stone… if she bonds with it…she might loose her own identity.