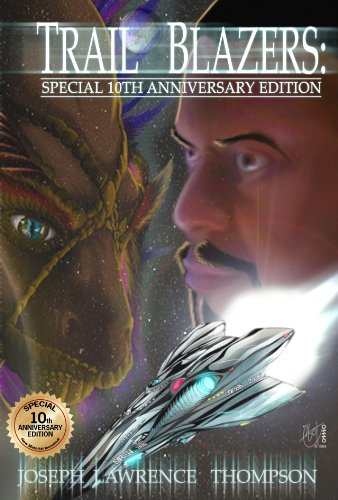 about this book: Trail Blazers is the story of Miles Kendricks, a successful, unconventional African-American star-ship captain living in the 25th century. He has a very good life to date, his own star-ship that allows him to travel and trade throughout the galaxy, his youth and health and the stars themselves that represent infinite possibilities. Miles is also on the verge of a great scientific breakthrough, one that will revolutionize his age: Dimensional Travel through a device he's dubbed Stable Dimensions in Transition, or the SDT. The SDT would theoretically allow his star-ship to travel from any point in the universe to any other, in fractions of a second. Miles realizes that will make him the most significant scientist of his age, but all he cares about is how rich it will make him. If it works.

Complicating matters is a fugitive alien with a price on his head named Ja'Rheen who takes refuge on Miles' ship. A malfunction with the SDT plagues Miles with memories not his own, those from seven hundred years into the past, sharing consciousness a nineteenth century slave on the run from brutal oppressors. Ja'Rheen tries help Miles understand the meaning of the slave's memories and his significance to Miles. Miles only wants to get Ja'Rheen off his ship before powerful aliens destroy them both.

Trail Blazers was inspired by my love of history and science fiction. As an African-American sci-fi fan, it's been difficult to identify with mainstream heroes that don't necessarily share my background. Sure there was a Lando Calrissian here, a Boomer or a Geordi La Forge there, but what I have always wanted was to enjoy an epic science fiction, action adventure story where the main character and several others shared my background and came from other diverse backgrounds. Trail Blazers is an epic tale with diverse characters exploring diverse themes, faith, hatred, reconciliation, family, love, the rights of all sentient beings human or alien and universal peace.

Anyone who loves a good space opera science fiction story will love Trail Blazers. It maintains a universal appeal to all who love fast pace storytelling and conventional high action drama. It will even appeal to those technical minded readers who feel science fiction has become too much about explosions and ray guns and less about advanced technology that is both feasible and awe inspiring.

Trail Blazers is a tale of pioneers where all the major characters have blazed a new trail for others to follow. Miles is on the verge of a technical break through that will revolutionize space travel. Ja'Rheen has the potential to become a great leader of his people, the Skalerians, and a galactic wide icon for Sentient Rights. Other characters make great strides in politics, human colonization from a dying Earth and true nature of the human (and alien) soul.

I hope the readers here will simply read Trail Blazers and enjoy it. It took years to write and revise as it is my first novel, but it was a joyous experience to bring this story to life. Writing this story taught me the benefits of patience, perseverance and the simple joy of creation. It was a pleasure working with a great editor, Peggy Stautberg and an amazing cover artist, Abel Garza who both helped to turn my somewhat chaotic thoughts into a work of art that I will always cherish.