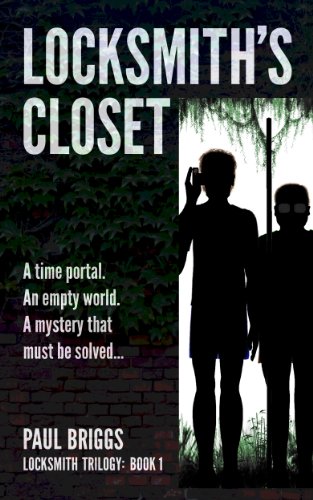 about this book: I started with a fairly simple inspiration: a boy goes through a portal to the future, finds nobody living there, and sets out to discover what happened/will happen to the human race.

Then I fleshed the idea out a little more. Where does he find the portal? Where did it come from? Where are the boy's parents in all this, and why doesn't he just hand it over to them? Can he save the world — and if so, how?

Gradually, the character of Lachlan Macquarie Smith began to take shape — introverted, secretive, bright but not a genius. I realized that Locksmith would need at least one friend, so I introduced Gary Thalberg, who would come up with ways to experiment with the portal and test their capacity to change the future.

Then I pictured his family — his late father, who died like a hero (all YA heroes seem to have heroic fathers), an overbearing older brother and a mother who is domineering, a bit larger than life (as parents always seem to their kids, at first) and beautiful enough that Gary develops a raging crush on her, complicating his friendship with Lock. With a family like this, it's perhaps understandable that Lock likes to keep as many things as possible to himself — including the portal.

I realized at this point that the death of Lock's father was more than just a way to limit the amount of parental supervision he had to evade. It affected him profoundly, especially as it had only happened a few months before the beginning of the action. Throughout the book, Lock is haunted by memories of his father, and torn between his heroic instincts and his knowledge that heroes tend to die.

But Lock wasn't the only one who needed a backstory — the portal itself needed one. In the process of developing the portal's story, I invented a human antagonist — Mr. Hance, who knows of the portal's existence and wants it for his own purposes.

So that's Book 1 of the Locksmith Trilogy. In Book 2 (Locksmith's Journeys), which I'm still writing, Lock and Gary will learn the full history of the portal — who made it, and why, and what happened to them. They will also discover the secret of what happened to the human race. Book 3 (Locksmith's War) will be the one where they actually do something about it.