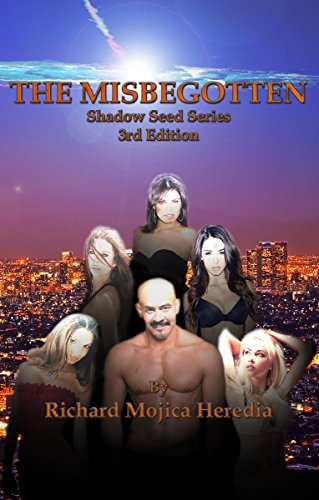 about this book: The Misbegotten is Book One of the Shadow Seed Series. It takes place in two moments in time simultaneously - the 21st and the 24th centuries. It follows the life and times of Estefan Ernando, the Overlord of the Aegis Synod and the Keeper of the Peace.

While the author describes the huge leaps in technology and science of the future, the reader gets the unique opportunity to learn of the past from Estefan himself. It is an erotic, sordid tale of an ancient man with unlimited power and influence as well as a kinky, sneaky story of a bored seventeen-year-old rich kid. Though their lives seem vastly different, desite them being the same person, the two Estefan's - seperated by three and a half centuries - are struggling with the same problem. They fear for their families. Whether it is someone or something, death and destruction always seem around the corner, threatening what they love the most. For the older Estefan it is the mysterious Destro-Mancer and his ultimate weapon, the Shadow Spark. For the teenage Estefan, it is genetic profiling and persecution by an over-zealous government. For both of them, they must decide whether to fight or run. They must try and figure out how to protect those they love, no matter the odds.

My inspiration to write this book comes from a thousand bits and pieces of my own past. Characters, happenings, instances, even some scenes, are based on my expeiences over the years, though there is no direct parallel to any given person or event.

Originally, the project began as two seperate stories until I realized the tone of each was very much like the other. That's when I came up with the dual method of telling the tale. It turned out to be a very fun book to write. I think I wrote over a thousand pages in the first seven months. By the time I had finished, it had become so much a part of me, I was reluctant to let it go. I cried. I had no idea how personal it had become, how much of me was written in those pages.

The book is geared for adults. Frankly, it is explicite in regard to wit and sex. It is not for the squeamish or faint-hearted as it describes all sorts of human depravity. Thus, the title - The Misbegotten. To me, it describes what it means to lose everything, to have to do whatever it takes to survive and then fight like mad to keep the spoils.

To my readers, I hope you enjoy the twisted, wild lives of my two Estefan's - both the boy with five girlfriends and the man with eight wives...

I leave the rest to what I've written in the tomb itself. Enjoy!