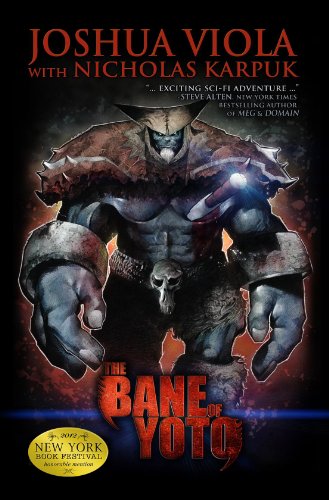 Book: The Bane of Yoto by Joshua Viola

about this book: The novel takes place on the moon Neos, a world shared by two species in the wake of their respective home worlds' destruction by a mysterious entity, known as the Arbitrators. On Neos, the brutish Olokun have enslaved the mammalian Numah, forcing them to mine an ore necessary for the construction of the Aegis Shield, which the Olokun believe will protect them from the Aribtrators' return.

The novel tells the story of two Numah brothers, YOTO, a spineless mine manager who works for the Olokun in return for certain and privileges, and EON, a warrior planning a Numah rebellion. When an attempt to kill the evil GENERAL VEGA fails, the mine explosion unearths a mysterious dagger, Yoto's assistant attempts to use the dagger to assassinate Eon, but the plan goes awry, and it is Yoto who is stabbed, and killed.

But Yoto does not die. Rather, the power of the Arbitrators resurrects and transforms him, the small coward becoming a giant warrior, immensely powerful, capable of vast feats of destruction.

Drawn by his love for CELESTE, driven to the edge of madness by her abduction and execution, Yoto becomes the greatest hope for the Numah, even as his brother, Eon, becomes the slaves' greatest leader, the story culminating in a battle of titans set against the backdrop of a larger conflict – the return of the Arbitrators and Yoto's confrontation of a force larger even than the slavemasters of Neos.

• THE BANE OF YOTO is a SEVEN-TIME AWARD-WINNING NOVEL