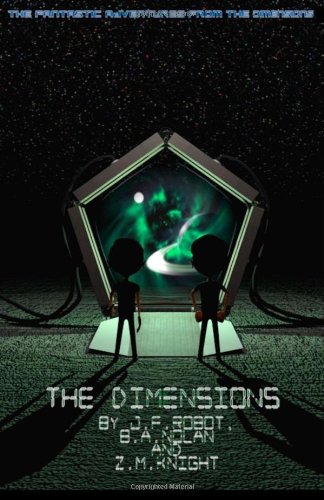 Book: The Fantastic Adventures From The Dimensions (Volume 1) by James Frendin Robot

about this book: • "What Is Your Book About?"
Well, to start, the book is the first in a series surrounding the adventures of a group of kids, one kid in particular, who are involved in fighting an evil, megalomaniacal, society that is trying to subdue all one hundred of these different worlds under a severe dictatorship. In ultimatum, these worlds are discovered by a scientist who then encounters the main character of the story and passes on a small set of ordinary but important objects.

• "What Inspired You To Write This Book?"
What Inspired us to write the book is actually very unclear. It originated as a set of stories fabricated by me and a couple of school friends and I think we came up with it to get away from the other nonsense school posed. But then, those days were long ago.

• "How Long did it take you to write?"
The rough draft took us most of our twelfth grade school year and editing took much longer.

• "How Did You Come Up With The Title?"
With the series title, I Just threw around a phrase (actually much longer before we started writing the book. but still pertinent to the stories) that was catchy in a sense. The actual book title was a basic statement introducing the worlds in the story.

• "Why Did You Choose This Cover?"
I actually made the cover from scratch using a freeware 3D Graphics studio called Blender. In the picture it's supposed to depict a scene in the story (which I won't describe for spoiler reasons).

• "What Was The Hardest Part About Writing Your Book?"
Writers Block. We always the struggle with that. That was one hard part and the others were trying to avoid making the story sound corny and trying to iron out consistency errors.

• "What Did the research involve?"
Mostly, it was to avoid unintentional plagiarism (say, for example, I come up with something that I think no one else has only to find someone else has fabricated it).

• "Did You learn anything from writing the book?"
I don't know about the other two but for me, I certainly figured out how to write and edit a long piece of work.

• "What Do You Want To Say To Your Readers?"
Read on and Obey Your Parents.