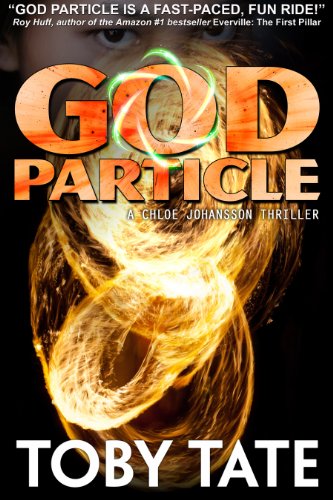 about this book: 16-year-old Chloe Johansson is about to take her finals after a grueling year at MIT, when she receives two phone calls - one from her best friend, who says she is pregnant. The other is from her mother, who informs Chloe that her father, Simon, is missing from his lab at CERN.

Before he went missing, Simon, one of the discoverers of the Higgs boson, AKA the God particle, invented a device that could shatter the very foundations of science.

But someone else is also after Simon's device, someone not of our world, and they will stop at nothing to possess its terrible secret.

Now, Chloe and her mother must travel the globe in a race against time to save not only Chloe's father and her best friend, but humanity itself.

The main inspiration for this book was my own daughter, who we adopted from China, just as the heroine in the God Particle was adopted from China by her parents. The difference is I'm not a famous physicist and my wife isn't a neurosurgeon! But hey, a little embellishment makes the story more interesting.

The primary reader for my book is anyone from thirteen on up - it's a great thriller for any age!

The title comes from the Higgs boson, also known as the God Particle, which plays a central role in the story.

The hardest part of writing this book, or any book, is writing the first word!

I did a lot of research by first looking up any info I could find on the Higgs boson, then on the CERN labs in Switzerland. I had to look at pictures and videos to see various places in Switzerland, Iran, Israel and all the places where my story takes place. I also had to read some young adult books and talk to various people about how teens react in certain situations, how they think, etc. All in all, it took a couple of months of research before writing could begin.

I must admit I learned a lot about the teen mind and the teen ego, as well as about physical science. It was quite a journey, and it's not finished yet, since I plan on writing several more books featuring Chloe. I hope you'll come along with me!

• "...a high octane race across the four corners of the Globe...I totally recommend this as a rip roaring YA sci fi thriller!"
— Wistfulskimmie's Book Reviews