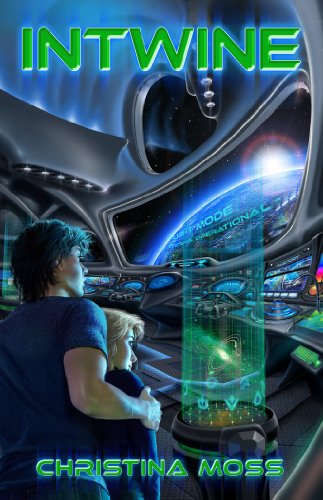 about this book: INTWINE is a young adult science fiction novel about a girl (Julie) from Earth and a boy (Seth) from the planet Artigun — a fictitious world exactly like Earth, but located on the other side of the Milky Way Galaxy. The geography of the two planets is nearly identical. The people of Artigun not only look like us, they even speak English. In fact, the similarities between the two cultures are remarkable.

The differences, however, are another matter altogether. The inhabitants of Artigun, originally taken from Earth some 15,000 years ago, have an average life expectancy of 950 years — nearly 12 times that of Earth humans.

So what happens when an average girl from Earth and a boy from Artigun meet and fall in love? What happens when a mild-mannered teenage girl discovers the Milky Way is actually teaming with human life and dangerous adventures? And what happens when she finds out the person she has become romantically attached to will outlive her, times twelve?

Written in the past tense and from the first person viewpoint of Julie, INTWINE is my first book, as well as the first in my series of Science Fiction adventures. I've created some loveable, as well as some pretty disgusting characters. INTWINE is not for everyone, but what book is? The fans of my stories truly love them, and that's enough validation for any writer to keep on writing.

• "I became very attached to this book, and started to more slowly because I didn't want it to end. I highly recommend INTWINE."
— C.D., Canada

• "Great book. Not weak-minded characters. I fell in love with them, and their world."
— A.W., Los Angeles

Besides writing for readers, I write to promote the idea that art of all kinds is good for the world. I also think that mankind should be looking to the stars, not necessarily with the idea that life is out there, but with an open mind to the possibility that it just might be. And it seems to me that a world united, and reaching to the cosmos is likely to survive longer than a world at war. Just saying.