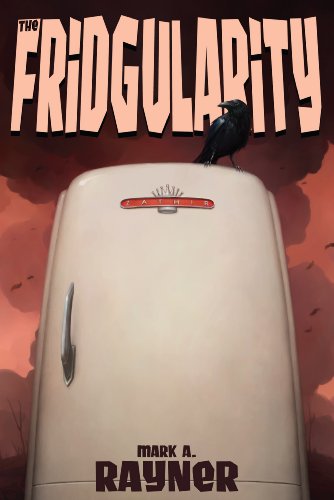 Book: The Fridgularity by Mark A. Rayner

about this book: The Fridgularity is a humorous satire of Internet culture, Internet addiction and the absurd possibilities of the technological singularity — the point in history when machine intelligence supersedes human intelligence.

It follows Blake Given, who is looking for love at the start of the story, and Blake's friends, as they all try to make sense of life in a post-singularity world.

It's tough work, because the technological singularity is occurring inside Blake's fridge: more accurately, on the screen of his web-enabled fridge and in the Internet. The bad news is the singularity is occurring in the form of an emergent consciousness, called Zathir, which needs not only the entire Internet, but all digital technology to grow. This sends humans back to the stone age. At least it feels that way to all the textroverts, Facebook addicts, and other digitally obsessed bipeds who can't use their gadgets anymore. Digital technology includes old-fashioned land-line phones and such basics as the power grid. In other words: a catastrophe.

As the world adjusts to this new reality, world governments, corporations and other shady organizations plot to get back control of the Internet. Blake spends most of his time just keeping Zathir happy, so that the military components of it doesn't go all "Terminator" on the world, and launches the nukes it now has access to.

All Blake really wants out of life is to be left alone, so that he can pursue his hopeless romance with Daphne, but his fridge has other plans.