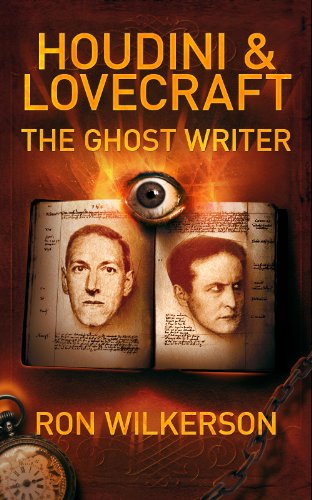 about this book: I was fascinated by the relationship between these two men, Harry Houdini and H.P. Lovecraft, absolute icons of their era, and the fact that they actually collaborated on a story for Weird Tales magazine in 1924. So I thought about a "what if?" scenario, and came up with the idea that there was, in fact, another collaboration between Houdini and Lovecraft, only this one became an adventure that was so horrifying and shocking that the true story couldn't be shared with the rest of the world... until now.

I originally wrote this as a feature film script, and it came close to a deal, but, like many other stories in Hollywood, didn't happen. But this has long been one of my favorite scripts, mainly because these two men are so different: Lovecraft came from a wealthy family, but, by 1924, had fallen on hard times, Houdini came from abject poverty, and had raised himself up to the absolute pinnacle of fame and fortune. Lovecraft was a Yankee blue-blood, Houdini was a Hungarian immigrant who spoke with an accent. The script came very close to a movie deal when I first wrote it, but, in Hollywood, not every good idea gets produced, while a lot of bad ones do.

So, this year, I took it off the shelf, dusted it off, and rewrote the screenplay as a novel. This gave me a lot of opportunity to flesh out the story, the relationship between the two men, and the other members of their psychic team. Anyway, I'm glad it's on Amazon's shelf now and not just on mine. It's a lot of spooky fun!