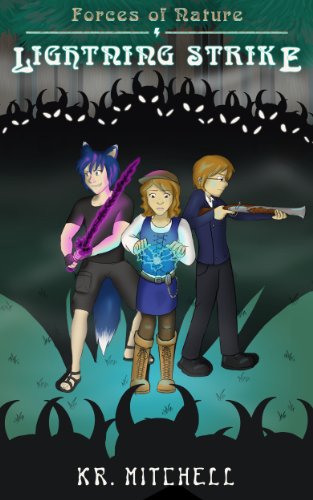 about this book: Forces of Nature: Lightning Strike is a fantasy story about a girl named Alison Moody. She lives on a the Blue Islands with her adoptive mother, Lynn, and grandparents, Irene and Joe. Alison showed up on the island twelve years ago as a little girl. She didn't remember where she came from or how she got there, but she was adopted by the Moodys after they find her by their home. The townspeople distrust her because of her mysterious appearance and she's outcasted for most of her life. When she turns 17 she takes a job at the local bar to make enough money to leave the Blue Islands. Things are good for her until one day a boy named Ren comes to the islands. Ren is a vulpin, a fox-like race that can control nature. Vulpins are hated by the islanders and they would all want nothing to do with him except for Alison. She's interested in his strange features and wonders why the islanders fear him, and she ends up on the adventure that she's always dreamed of.

I was inspired to write this book over three years ago. I wanted to make a story that was character driven and humorous as well as different. I wanted a story about characters that seldom appear in literary fantasy. The setting of the story escapes from the traditional Medieval castles and wilderness into a time inspired by the 1920s of our world. Alison is a female protagonist that leads us through her story with strong characterization and development. Other genres have embraced female leads, but they have yet to make a splash in the fantasy genre and I hope Alison can be a model to be followed by other writers in the genre.

I learned a lot from writing this book. I learned that writing the story is only the first part of making a novel successful. More than anything I desire for readers to read my stories and be entertained. I look forward to a bright future with Lightning Strike leading the way.