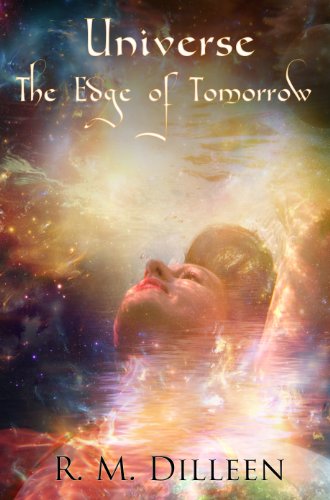 Book: Universe - The Edge of Tomorrow by R. M. Dilleen

about this book: I have been working on this book series, called Universe, for about ten years. The greater concept of the series is to explain how superstitions, myths, or any weird phenomenon we experience might be explained naturally.

Intelligent life has evolved to such a level that it transcends its planetary origins, achieves immortality and roams the universe. These highly evolved beings, called Magitons, are perceived as gods by the mortals they encounter.

In this first novel, Universe: The Edge of Tomorrow, one of the Magitons has gone mad after being possessed by an evil entity from another dimension.

An ordinary girl, Lidda, is caught up in a galactic battle seeking to destroy the evil rogue Magiton. She encounters aliens, in human form, who have been sent to Earth by an ancient and powerful Magiton god with plans to build a weapon to defeat the evil one. She falls in love with his human incarnation.

Lidda's life is turned upside down on discovering she is central to their plans. With the help of her companion Magiton, Widhbo, she works on building a superior model of androids to further their cause.

The line between human and machine becomes increasingly blurred as the androids are programmed with a Magiton's level of artificial intelligence. She has a peculiar relationship with Widhbo who is slowly going insane.