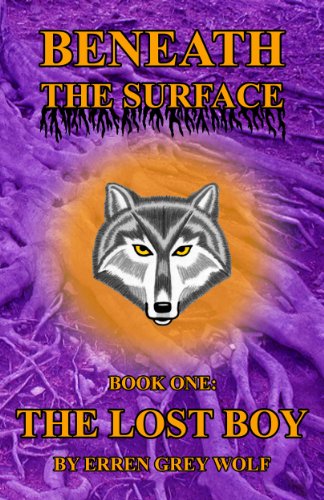 Book: Beneath the Surface - The Lost Boy (Volume 1) by Erren Grey Wolf

about this book: This book is about two brothers named Sean and Erren Archer. Erren is born out of his dead mother's womb and this traumatizes Sean so much that he abandons his baby brother in the forest. The Queen of the Forest finds the abandoned child and takes him away into her etheric realm. When Sean returns and finds his brother gone from the spot he'd left him, beneath the old oak tree, he feels guilt and remorse. When the police and civilians did a search of the forest and did not find the boy, Sean began his noble quest to find his brother and right the wrongs he had done. Along the way, his telepathy begins to awaken and the forest becomes haunted as the Forest Queen tries to stop Sean from taking her little boy, whom she was protecting from a horrific future. This tale is set in the future on a distant planet far away from the destroyed Earth.

The book series is entitled Beneath the Surface because it has to do with a lot of hidden things. For example, the two brothers are telepathic (Sean's latent telepathy fully awakens in book two) and they can look beneath the surface of other people's minds. The Forest Queen's etheric palace is also beneath the surface of the Mississauga Forest. In future books, the enemy is hidden, and so forth.

The cover has tree roots that go deep beneath the surface. The series title also has roots that explore beneath. The grey wolf represents the wolves that the lost boy, Erren, runs around with in the forest. The colours of orange surrounded by purple represent Erren's aura.

This series of books came up from beneath the surface of my conscious mind and revealed the traumas that were hidden beneath it and presented them in symbolic form for me to deal me. Writing science fiction is my form of therapy.

Video: Beneath the Surface - The Lost Boy (Volume 1) by Erren Grey Wolf