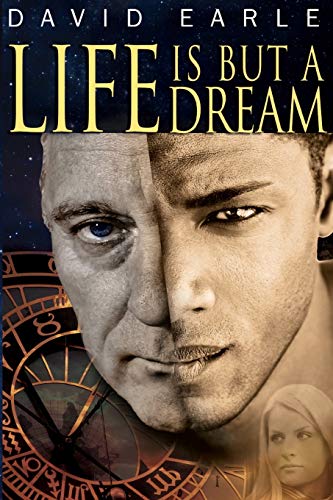 Book: Life is but a dream by David Earle

about this book: Writer David Earle was sitting outside a coffee shop, feeling a bit melancholy, contemplating the age old question of life, when he was suddenly struck with the thought, 'What if this is all simply a dream or just a past life, that I will realize as being such, when I wake up in the future?' It was as if a light bulb went off over his head, and the premise for his captivating new science fiction romantic thriller, Life Is But A Dream, was born.

Life Is But A Dream is a reverse twist on reincarnation. There have been many books, movies and even a Broadway musical written where reincarnation is the premise, where the main character in the present recalls a life in our past. What makes Life Is But A Dream different is that it begins in our present, but it is our present that turns out to be the past life for the main character, and the only life he is able to recall when he awakens in the future (year 2125) knowing nothing of his present life (due to amnesia), but only the life he lived in the late 20th and early 21st centuries. For the main character it's time travel without the use of a time machine and the devastating realization that there is no way of returning back.

Although most of Life Is But A Dream takes place in the future, therefore a book of science-fiction, it is uniquely different from other science-fiction in that it doesn't rely on concepts such as intergalactic space travel, aliens, robots, or other such fanciful ideas. In fact, it has none of that. It encompasses the thoughts, emotions and reactions of a man, Roger Owen, who wakes up in the body of someone he does not know, Sydney Hamilton, with the realization that the only life he has ever known is gone – his wife, his children, his entire family, friends and loved ones, including himself – are all dead and he can never go back and pick up where he left off. These feelings are heightened when he seeks to find any living kin of this past life and his fervent, if not desperate, attempt to be accepted into the life of one such descendant from his past immediate family. Add to this the burden and fear of not knowing why a certain mysterious stranger is following him and ultimately out to kill him.

Life Is But A Dream also touches on the romantic lives of six people over the span of three centuries – the lifelong loves of Roger and Laura who meet at a New York City dance club in 1995, of Sydney and his wife Margie who meet in an Oxford, England pub in the late 2070's and the love emotions Dr. Jessica Wynn feels for the outer appearance of her patient Sydney and the inner-self personality he possesses as Roger Owen in what is now the year 2125.

A story for all ages and painstakingly researched, Life Is But A Dream is historically accurate. An enormous amount of time was spent on research throughout the two years it took to write Life Is But A Dream. This research was required on various topics relevant and prominent in the story such as; viruses, pandemics and plagues, the 1918 influenza pandemic, the CDC, and of course reincarnation along with literally dozens of other less mentioned topics; Manorbier Castle, split personalities, interpreting dreams, Elizabethan era bridewells, medicinal plants and tribes in the Amazon, and many others – all of which required the use of numerous books, video documentaries, and web sites to make sure that what was written was correct. Although Life Is But A Dream is a book of fiction, one can be certain that all of the aforementioned topics in the book are based on fact.

Video: Life is but a dream by David Earle