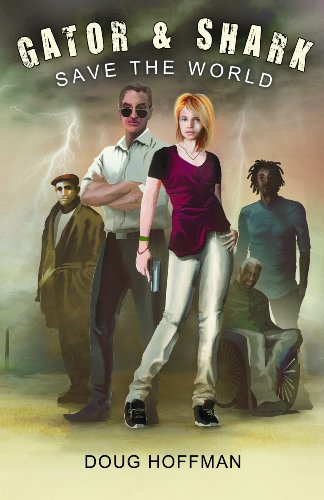 Book: Gator & Shark Save the World by Doug Hoffman

about this book: One day, while thinking about the premise of Hellboy -- that American scientists had been secretly investigating the supernatural since World War II, and now had many wonders to show for it -- my thoughts drifted to Nazis, Operation Paperclip, and the extremism of modern-day American politics.

Then I forgot all of that, started channeling my inner fifteen-year-old girl, and began writing this novel of the near future.

Gator and Shark Save the World is about love and friendship, and the baggage good and bad that we inherit from our elders. The science fiction aspects concern the evolution of intelligence and the nature of consciousness. But I suspect readers will love or hate the book depending on their reaction to Shark. She's clever and brave and bad-ass, but she's also damaged by her mother's early death, and repeatedly embarrassed by her father, a U.S. senator who sees her as a political prop. At the beginning of the novel, her only true friend is her grandfather, Gator, an ex-Secret Service agent whose idea of parenting is to train Shark to be his "little ninja." She wants to get out from under her father's thumb and make friends her own age . . . and avoid the ill intentions of both the Feds and the strange entity who shows up in the Starbucks bathroom at Ronald Reagan University.

Note: the book contains lots of profanity, some violence, and very little sex, all of it off camera. Some readers may be offended by the political satire, while others may giggle themselves silly.