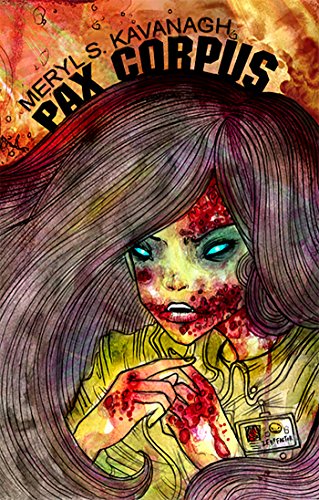 about this book: For years and years I touted my debut novel, PaxCorpus, as part horror, part science fiction and part thriller. Today I believe that is still true—this novel is a kick in the teeth from hell.

Three years it took me to get this written and published. And that was before I came upon the fact that I am transsexual... So the name across the cover doesn't match who I identify with now.

But the book is still worth the read, even if you've gone and finished Escape Velocity.

We start with Dante Marcellus, Emergency Response Unit specialist, as he's firing wildly into the city streets of Manhattan that flow endlessly with the ravenous undead, or "deaders," as we know them now.

And then we come to find that the narrator is describing fragmented memories from 2013 and he's driving through an apocalyptic Harrisburg, Pennsylvania, describing to his team what he can and can't remember.

Every other chapter you're hit with another piece of the puzzle until the very end when it all finally comes together—and then you realize it wasn't about the memories at all.

Hell, they're probably not even real.

Join Dante Marcellus, Meryl SinGarda, Julianna Moretti, Jack Marcellus and the infamous Nuhm De'Ara, in the story that blazes like a Mack truck on fire through the concrete wall of a freeway barrier, barreling into a river of blood, littered with the faces of the dead and everything that comes with being responsible for the deaths of thousands.

This is the beginning of the end.