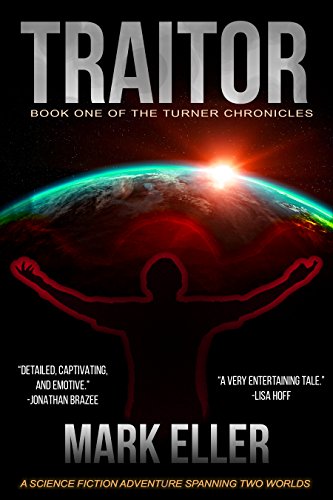 Book: Traitor, Book 1 of The Turner Chronicles by Mark Eller

about this book: Sometime around forever into my reading life, I got tired of cocksure heroes with big muscles, perfect aim, and stunning good looks, so I decided to create a hero with none of these. Enter Aaron Turner, a less than average man who owns one unusual ability, he can teleport between two worlds.

Aaron is a small fellow who spent most of his life as a cripple in his home world while being raised by an illegal militia intent on violent domination. Aaron is a weak man, full of self-doubt, insecurities, and isn't particularly strong. What he does have is an almost unshakable integrity, a desire to maintain his self-concept of honor, and the resources of two worlds.

The militia's pawn, he enters Isabella as a spy, beachhead of the miliia invasion, and realizes he doesn't like their plans as his loyalties become conflicted. Traitor is about how Aaron derails the militia while simultaneously stopping an Isabellan Talent Master intent on empire, saving Last Chance, a small frontier town, and stopping the rampage of Talented psychopaths he inadvertently teleported into his home world. He does this while running a general store in Last Chance and being bullied into taking action by three women who insist he is more than he believes.

Yes, The Turner Chronicles is a series with action and adventure and magic and violence, but it is much more. Aaron Turner is intended to show each of us that hero's are not necessarily born. Sometimes they are made by events, and sometimes they make themselves because, despite all their personal failings, when something is wrong they have no choice but to stand up and be heard. No matter what the personal cost, Aaron Turner eventually stands up because his integrity demands he do so.

Video: This video features quotes from Mark Eller's interview about his novel "Traitor: The Turner Chronicles"