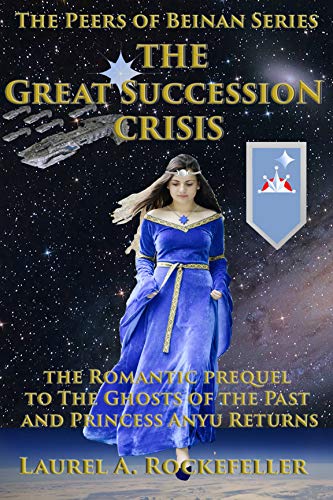 Book Reviews: The Great Succession Crisis by Laurel A. Rockefeller

about this book: The yen-ar is BE 6325. Queen Isabelle of house Gurun is only queen for the last five yen-ars following her father's retirement from public service due to cancer. Isabelle's legal heir, Prince Anwell has abdicated his birth right for reasons that will not become clear for generations. Now her representative petitions the Great Council to change the ancient law prohibiting daughters from inheriting their mother's titles and offices, a law rooted in the distant warrior past on another world (A672E92 Quintus) long destroyed when its star went nova.

The Great Council refuses. What happens next is a crisis of succession not seen since the last civil war in BE 1301, a great succession crisis whose consequences will be felt for generations and will transform the life of the queen's daughter, Princess Anlei.

Part one of the Legacy of Princess Anlei Trilogy.

Now in third edition! What's the difference between 2nd (aka extended) edition and 3rd edition? "At the Great Council" now replaces "A Legal Problem For Princess Anlei" as the first chapter, we meet Princess Anlei later, and the princess is less insolent and more royal when we finally do! Read the preview featuring the 2nd edition, then buy the 3rd edition and see what a world of difference it makes!

I am an avid reader of novels, and I found "Great Succession Crisis" (from the "Peers of Beinan" trilogy) by Laurel A. Rockerfeller to be a gripping Sci-fi story. It creates an in depth world with characters are realistic and easy to identify with. It has intrigue, romance, drama. It is thoroughly enjoyable to read.

Was hesitant about reading this book, unsure whether I would like it. Found it enjoyable and smooth reading. Would recommend to others. [by Kimberly Teeters]