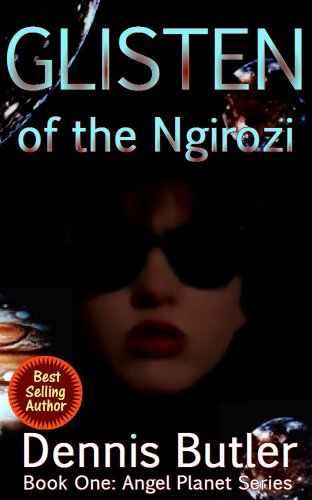 Book: Glisten of the Ngirozi - Book One (Angel Planet) by Dennis Butler

about this book: This book is primarily a science fiction / romance book. I love science fiction, but one of the things I have tried to achieve with this book is to make it somewhat believable, i.e. events could actually happen in the near future. This concept has led me to write detailed descriptions of how and why things happen. My hope is that I will stimulate your imagination and leave you trying to answer the simple question, "What if?"

The story begins only about 110 years in the future. Who knows, scientists may actually achieve cold fusion or some other method of space travel that doesn't require burning fossil fuel by 2125.

The main character, Kevin Finley (Fin) tells the story in past tense. I re-wrote the story in present tense but it didn't feel right. Kevin attempts to describe what it would really feel like if we met beings from another planet.

If you read science fiction, you probably watched Star Trek during one of the many seasons it was broadcast. You may have even felt a strange attraction to unusual looking beings from another planet, such as the Klingons. So it is possible to be attracted to someone who looks completely different. It is also possible to fall in love with someone who looks completely different. Although we may be different species, hopefully we are still humanoid, part of someone's master plan for the universe; maybe.

The crew of the Earth ship is lucky that the first encounter with beings from another planet is a positive encounter. However, if we consider how many planets in the universe may have life, the odds that they are all highly evolved and civilized are slim at best.

The story centers around the interaction between the two species and the challenges of communication. Unlike a sci-fi movie, there can be no verbal communication. There is not even a reference point to attempt to communicate. Only the strong will of both species makes communication possible. Where communication is achieved, lasting relationships can be formed.