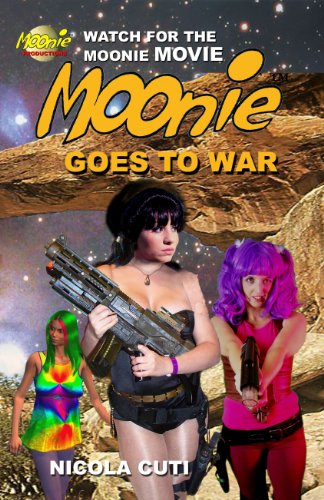 about this book: The Starbabes are dying from an unknown disease and the only person who can save them is a Dr. Galen who lives on a planet called Pales, which is under threat of invasion from the gathering fleet of Gog the invincible. Moonie the Starbabe, who can live in outer space without any life support, is sent by Poppa to retrieve the doctor and stay out of the war. She and her crew flySapphire, a planet conquered by Gog and ask Gog not interfere with their mission of mercy but Gog has no intention of allowing Moonie to escape his clutches. He plans to add her ship, with or without her cooperation, to his invasion fleet.

Moonie's only hope for survival is to join forces with the underground, led by the dethroned Queen of Sapphire and attempt to thwart Gog's invasion plans. Treachery causes the battle to begin ahead of schedule and Moonie's ship ends up being chased by the entire fleet of the enemy and she has no way to warn her allies she is coming.Please watch for the movie "Moonie and the Spider Queen" based on her first book, which is due for a release date of Auguat 2013.

Video 1: Moonie goes from a GRAPHIC NOVEL to a LIVE ACTION space opera MOVIE in this trailer
Video 2: Torry and Perry were interplanetary grifters when they came across Moonie the Starbabe who could live in space without any life support