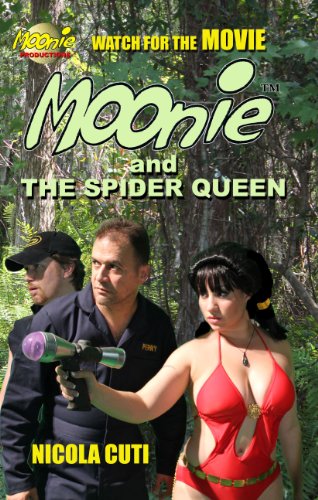 Book: Moonie and the Spider Queen by Nicola Cuti

about this book: Moonie, the Starbabe, the heroine of my book is a creation I had come up with 40 years ago and have been developing ever since. I had read about a space opera heroine named "Barbarella" and pictured what she would look like, voluptuous and sexy. When I finally saw her she wasn't anything the way I had pictured her and so I decided to created my own character. Since I was an artist and writer, it was easy for me and I published her, Moonchild, on the Underground. As time went on my art style became more polished and I decided I needed a reason why she could live in Outer Space without any life support. I created the Starbabes and shortened her name to Moonie. As a fan of Flash Gordon and Buck Rogers, I decided to have her adventures in their vein, exciting and always in motion, but with an eye on modern science discoveries. Here is her first adventure where she does battle with the awful Spider Queen, who is holding her two sister Starbabes as captives. She is being pursued by two grifters who want to capture her and take her back to Earth where her ability to live in space will be uncovered by the big industries. The novel is, illustrated, erotic and certainly not for children.

• "The writing of this book is great, shockingly great, better than most books I've read." — Steve, customer review on Amazon.com

• "She's evolved into a sci-fi adventurer,lusted after by all, in a space world created by the mind of comic (and comix) great talent Nick Cuti. Moonie is ADULT fare,but not just for the sake of shock value." — Bugman1, customer review on Amazon.com

• "The exotic settings are deftly realized, the characters and battle scenes vivid and believable, and the numerous sex scenes lushly described - so, although this is full-bore "space opera" of the authentic 1950s-TV flavor, it is strictly "Nix" for the kiddies." — DoubleW, customer review on Amazon.com

Video: Moonie and the Spider Queen by Nicola Cuti