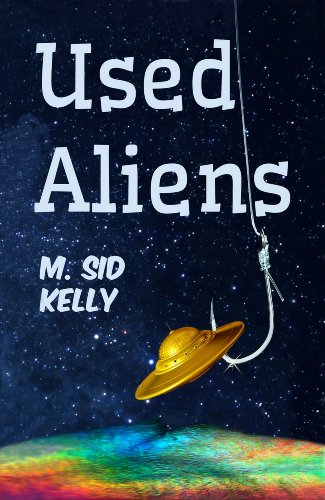 about this book: "Confusion is a powerful tool."

The Vice President of The Galactic Pool utters this phrase as he explains his plans for an “accidental” invasion of Earth.

He dispatches two diverse teams of aliens with conflicting instructions. The individual aliens have their own conflicted personal ambitions as well. Following their special checklist, they converge on Earth’s worst bass fisherman, a couple of buzzed fossil collectors, and a blacksmith from West Africa. The confusion appears to be working – but too bad these aliens chose to mess with Earthlings. It’s always fun until someone crashes.

Themes include bad bureaucracy, paleontology, pseudo-science, pan-galactic documentary filmmaking, surfing dinosaurs, and an inordinate fondness for plastic worms. These themes are delivered by a cast of imaginative space aliens and unsuspecting, but skeptical, Earthlings.

And the sex scenes are strictly telepathic – sorry. We don’t want to get our teeth kicked out...

Reviewers compare it to Hitchhiker’s Guide to The Galaxy and Red Dwarf, but with more of a dark and saucy edge.

• "…offers insightful satire, intelligent wit, an imaginative setting, unique aliens, and even a bit of real science. I recommend it to humor fans with a scientific outlook." – D.L. Morrese, author of the Warden series

• "…well thought through on many levels but the punchiest parts for me were some of the slapstick comedy sections. This is a work of splendid quality and is recommended for anyone who loves galactic scale conspiracy and stupidity and a side splitting comedy that is also relatively scientifically sound." – Little Ebook Reviews