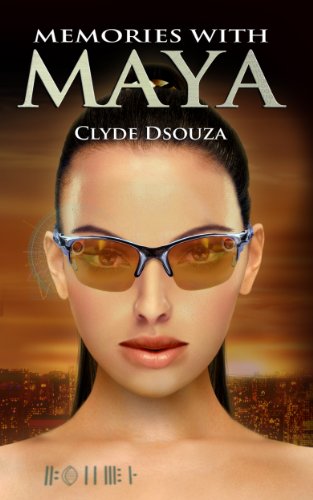 about this book: Memories With Maya is a story about people, relationships, and how technology plays an integral role in enabling intimacy between a couple...transcending time, space and even the human lifecycle.

The story touches on the topic of transhumanism and reads as a bitter-sweet romance grounded in hard science. The title "Memories with Maya" has dual significance: memory storage and reminiscing. Artificial intelligence, Augmented Reality and related hard science is featured prominently in the book and is the result of research by the author spanning over a couple of years.

The aim of this hard science fiction novel, is not to simply to present the science, but to seed new ideas that will hopefully pave an alternative path towards transhumanism.

The cover for Memories with Maya was selected from a competition that generated 80 entries. The "Wizer" has two cameras, giving it capabilities of stereoscopic 3D image processing of the environment. Hardware such as Google Glass are now on the horizon, it is the intent of this story to show a possible route such a "Wizer" might take in future iterations of wearable technology.

A few original terminology has been coined in the book:
• Dirrogate - Digital Surrogate
• Wizer - Visor with Augmented Intelligence built in