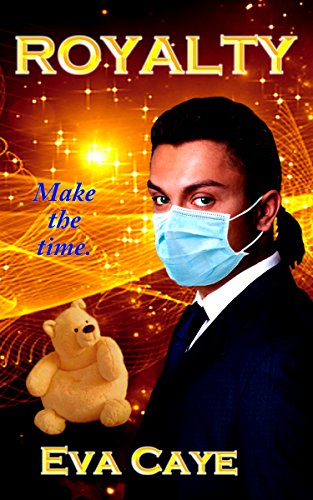 Book: ROYALTY (To Be Sinclair) by Eva Caye

about this book: Crown Prince Zhaiden Sinclair's divorce not only left him depressed and stressed; as the single parent of two beautiful sons, his demanding position as the Heir to his father the Emperor leaves him little time to spend with the boys, much less deal with their psychological needs. Once he meets child psychologist Lady Renee Delacorte, Zhaiden is so impressed with her calm understanding and generous lovingkindness that his imagination is instantly captured with thoughts of how to pursue her.

He must dedicate himself cleverly and wholeheartedly to it, however, for Renee has always led a quiet professional life because of childhood trauma. She is grateful for his friendship, but it takes a lot of encouragement from the entire Imperial Family to lessen Renee's apprehensions about being Empress someday. Zhaiden's political duties also expand dramatically as he assumes the galactic interface of the Empire, for he needs that authority to demand treaty terms from the desperate Javonians. Although he declares his love to her within three months, he must scrimp what time he can from his busy schedule to convince her he needs her not just for himself but for the sake of the Empire.

And no one can imagine what horrors Zhaiden's ex-wife plans when he finally gets Renee to agree to marry him...!