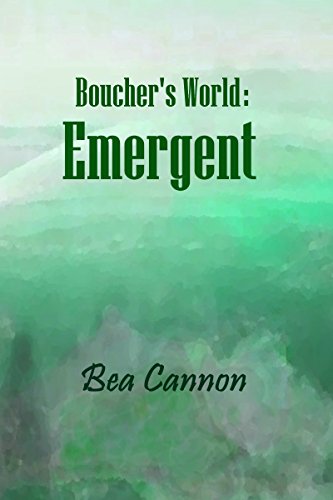 about this book: The denizens of Boucher's World, Humans and the pets they brought from Earth, and Elvwists, a race of beings with psychic abilities from another galaxy - who beat the Earthlings to this world by eight hundred years - became trapped together inside a mysterious Dome that covers their entire continent, a year after the Earthlings arrived on the world.

During the troubled times that came about after that - later known as the Turmoils - the Humans reverted to savagery, and remained in that state until they, along with their ex-pets, began developing psychic abilities similar to the Elvwists. This was later called the Change.

The Elvwist are a much older - and mature - race than the Humans and are gentle giants who helped the Humans and the ex-pets learn to control and use their abilities.

It has now been a thousand years since the Change, a total of two millennia since the peoples of Earth landed. For centuries, they, along with the Elvwists, have sought a way out of the Dome without success.

Then one day,a young Human female and her Cat partner, both employees of the leading pest company, were working hard to earn a bonus by clearing extra mice and voles from a field near the Dome wall (not so easy since they have to ensure the safety of said pests) and discovered an exit from the Dome.

"Boucher's World: Emergent" chronicles what happens when this young woman finds love, adventure, and an enemy.