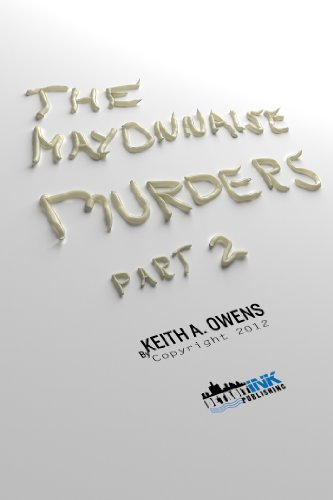 about this book: The Mayonnaise Murders began as an assignment nearly two decades ago when an education research company based near Washington D.C. asked me to write a detective story for kids. I was intrigued by the idea and definitely didn’t mind getting paid to unleash my imagination on a regular basis and take it out for a walk. After I had written several chapters I showed them to the folks at the company who loved what they saw but were concerned that it might be a little much for young kids.

I began work on another book for young kids that they also liked and kept. We agreed I could keep Mayonnaise for myself. Since that time my life has taken numerous turns up, down, and sideways and I had to put it on the sidelines. I didn't pick up Mayonnaise again until several ago when I made the decision to finish the projects that I had started. No starting another book until I handled the unfinished business waiting for me in my files.

It took some sputtering starts and stops for me to get the Mayonnaise Murders engine up and running again, but soon my two lead characters, Vid and Vee, began re-introducing themselves, reminding me why I never should have let them collect dust for so long.

Every writer, if he/she writes long enough, will at least once write something they feel is special. That's how I feel about The Mayonnaise Murders. This is fantasy along the lines of one of my all-time favorites, “The Hitchhiker's Guide to the Galaxy”, designed for a fun ride. Because sometimes that's just what a reader needs.