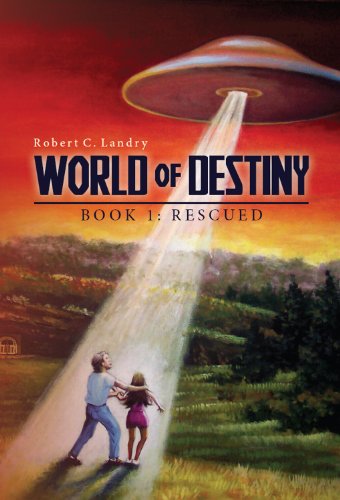 about this book: World of Destiny is about Trevor Sansing and his daughter, Sarah, who have survived the demise of most of Earth's population. When they venture from their East Texas home, they are rescued/abducted by aliens and brought to a new world. They learn en-route that Connie Sansing, who was visiting neighbors when all this happened, was also picked up and brought to the same world. But they have no clue where she was taken on this strange planet. They have to find her. They learn that this new world is already sparsely populated by abductees that have been brought here over the last eighty years. Connie could be anywhere, and they have to find her. But they will need a guide. Without much choice, they are thrown in with a group of kids who were all born on this world. They reluctantly agree to let the Sansings tag along. The adventure begins and the search is on.

I originally intended this book to be a fun adventure story for young adults. But it turned into so much more than that. Because I rarely had much time to devote to writing, the first manuscript was years in the making and never was quite finished until I retired. Book 2 was finished in less than a year and book three is almost done after only six months. The title was originally going to be "The Lansing Chronicles". But right before I was ready to publish, I googled the name and discovered that it was already in use. Since this new world was going to be named Destiny, I changed the name to World of Destiny and the main character's name from Lansing to Sansing which was my grandmother's maiden name anyway. The artwork for the cover on both of the books in the series was done by my brother, Gary Landry. The hardest part in writing this series is the development of the main character, Trevor. I modeled his looks and temperament after one of my other brothers, but Trevor's relationship with his wife parallels some of the traumatic things I went through in my own personal relationship. It was often hard to write having to revisit some of those past experiences and emotions. But writing about them helped me deal with some of those feelings that I had buried deep as each one resurfaced during this process. The main thing that I wanted to come across in these books was that one man sometimes can make a difference. And that no matter how hard you get knocked to the ground, you have to stand back up and get on with your life.