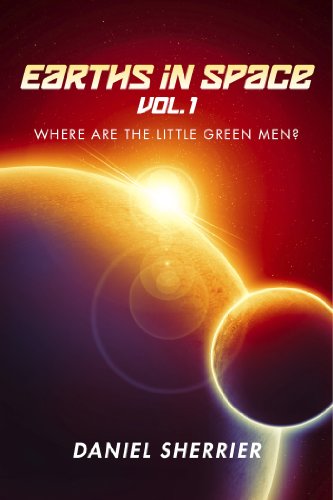 Book: Earths in Space vol. 1 - Where Are the Little Green Men? by Daniel Sherrier

about this book: A space-faring team of explorers learns that life out there is much like life here — and just as unique.

In the new science-fiction e-book series, Earths in Space, Amena Wharry and her team discover that their Earth is not the only one. Independent human civilizations populate the cosmos, with different people taking their different worlds in different directions. It's not nearly as exotic as Amena had hoped, but she finds it's more fascinating than she ever expected.

The team's experiences reflect the process of learning. It takes some of the magic and mystery out of the universe, but replaces it with different amazement plus opportunities for self-discovery.

Volume 1 is titled "Where Are the Little Green Men?"

Answer: There are none, but who needs aliens when you've got countless worlds worth of humanity to explore?

The series loosely brings the structure of a television season to prose. Each volume contains two novella-length episodes. In this first volume, we have "Liberty or Death" and "The End of an Earth."

History buffs might be interested to know the name of the spaceship, "The Patrick Henry," which will hopefully get people curious about a Founding Father who did not become president. The name ties into a theme of the book — nothing is more liberating than education and exploration.

The series is appropriate for teens and up. It's geared toward anyone who enjoys comic book-style adventure with an emphasis on colorful characters who will grow and evolve over the course of these books. To start, we have:

1) Amena Wharry, the leader of the group, an asexual archer who's in love with discovery and can't resist helping people in need;
2) Kaden Cadmus, a martial arts expert, perfect gentleman, and lifelong best friend to Amena;
3) Dr. Sela McLeese, the most brilliant inventor of our time, though sometimes inspiration strikes faster than she can work;
4) Gilmore Brumby, an arrogant engineer who is pleased to grace the group with his expertise;
5) Mariana Regan, a brutally honest master detective who takes nothing on faith;
6) Ballard Neverson, a ex-Navy SEAL who's ex for a reason and sees each new world as a potential threat;
7) Jemini Capestany, an astounding young acrobat with a tendency to alternate between bravery and cowardice; and
8) Dr. Whitaker Banville, the filthy rich former physician and current amateur astronomer who bankrolls the team, though he's not the most stable individual.

Their mission: To see what's out there.

The possibilities: The universe is an awfully big place...