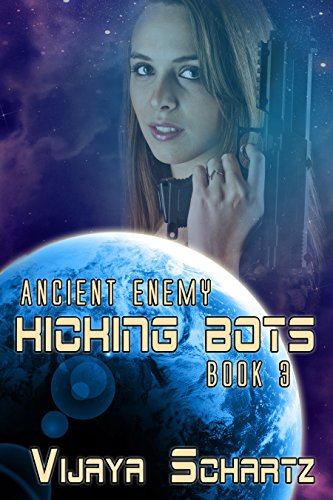 about this book: An alien plague infected Earth, and Dr. Melissa Campbell has found a cure... but she fears government officials will keep the cure for themselves, so she hires a body guard... see, the cure is in her blood.

She never cared for military types, and this enhanced supersoldier is everything she cannot stand. He is downright impossible... and oh so sexy. But that's not the point. The complication lies in the fact that Melissa is one of the sisters. The human children modified to obey the alien invaders, those Anasazi who returned from the stars after 800 years, now called the Anas-voohri. And Melissa doesn't know it... yet.

In this dangerous world at war with an alien race, Melissa will rise to the task of ridding Earth of the alien invader... if she can overcome her programming. Bennett, however, knows exactly what she is, and he will watch over her no matter what nasty tricks she pulls on him. And she knows plenty of tricks.

In this last book in the Ancient Enemy series, witness the final battle of the human race against a powerful invader, and the happy holiday ending for the planet and for our two incorrigible lovers.

• "Begins with a bang and keeps the fireworks coming. As much as Melissa and Bennett try to fight their feelings for each other, it is too strong for them to deny..." Sensual Reads - 4.5 stars - Sultry

• "I really enjoyed this book. Even though I hadn't read the previous two... I have always been interested in the mysterious disappearance of the Anasazi and this story nicely filled in the blanks... exceptionally well written. I am definitely going to have to find the previous books and check them out as well." - The Romance Studio - 5 hearts - rated very sensual