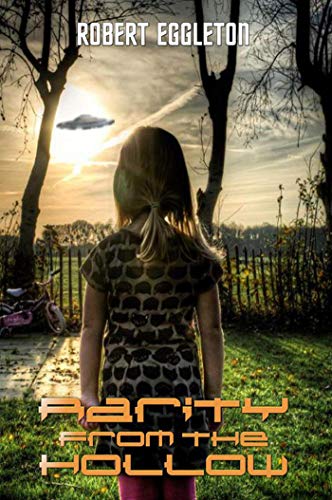 Book Reviews: Rarity from the Hollow by Robert Eggleton

about this book: Rarity from the Hollow is a Lacy Dawn Adventure -- a project that produces children's stories for adults only and raises funds to prevent child abuse. It is a science fiction / fantasy satire that begins in trauma and quickly evolves to laugh-out-loud funny almost to the point of tears. "Imagine the Wizard of Oz and Another Roadside Attraction smashed together and taking place in the hills of West Virginia ... " (Review, Garten, Atomjack Science Fiction Novel). It was originally published as an ebook in 1996, won the Noble prize for one of the top ten releases of that year, and went out of print a month later when the inexperienced publisher went out of business. It was reprinted in 2012 by a company in Leeds, England, and is avaialble as an ebook, paperback, or hardback.

The target audience is large: science fiction readers in general, old hippies, rock music lovers, political satirists, marijuania smokers, christians ("Jesus is for all people, not just those on Earth"), mental health workers, activists against child abuse, and teenagers who hide it from their parents, such as watchers of South Park. It is preceded by three short Lacy Dawn adventures published in magazines and the sequel will be released when sales of Rarity slow down. It took six month to write, longer to edit with input from two professional editors, and promotion is a life time. The title is from a chapter in the novel and refers to a yardsale in a West Virginia hollow -- extraterrestrial merchandise.

There has been three covers, the last chosen by the current publisher. By far, the hardest part of writing is self- promotion when one can't afford to pay to advertise. I research cockroach anatomy and behavior for this novel. Overall, I learned that trauma is best addressed by empowerment of victims, instead of psychotropic drugs. Help abused kids who live in a very poor state at a time when federal cuts to programs are devastating -- buy Rarity from the Hollow. For more info, search the title or email me.

"A fun, sometimes cleverly-gonzo, and even inspiring tale about an undaunted girl's close encounter of the weird kind." -- David Brin

Mr. Brin is an American scientist and author of science fiction. He has received the Hugo, Locus, Campbell and Nebula Awards. His novel, The Postman, was adapted as a feature film and starred Kevin Costner in 1997.

• "...In the space of a few lines we go from gritty realism to pure sci-fi/fantasy. It's quite a trip." — The Missouri Review

• "...utterly compelling...a chilling, engaging verisimilitude that deftly feeds on both the utter absurdity of the characters' motivations and on the progression of the plot ... In the spirit of Vonnegut, Eggleton takes the genre and gives it another quarter turn." — Electric Review / Midwest Book Review

• "...a hillbilly version of Hitchhiker's Guide to the Galaxy...what I would have thought impossible; taken serious subjects like poverty,ignorance, abuse...tongue-in-cheek humor without trivializing them...profound...a funny book that most sci-fi fans will thoroughly enjoy." — Awesome Indies (Gold Medal)

• "...sneaks up you and, before you know it, you are either laughing likecrazy or crying in despair, but the one thing you won't be is unmoved...a brilliant writer." — Readers' Favorite (Gold Medal)

• "...There is much here worthy of high praise...Eggleton reminds me very much of Robert Heinlein at his peak ... " — SF Crowsnest

• "...Good satire is hard to find and science fiction satire is even harder to find." — The Baryon Review

• "...psychologically disturbing at a different level to what I have seen before ... " — The Reading Rose

• "...laugh-out-loud funny at times, satiric of almost everything it touches upon..." — Atomjack Science Fiction Magazine

• "...This piece of speculative fiction is nothing like anything I've read before. It faces reality head-on while also pursuing themes that are outlandish... amazed by how the author has aptly mingled tragedy with humor ... " — Page Hungry Bookworm

• "...a story with humour and darkness and plenty of twists and turns ... " — Splash into Books

• "...the writing feels timeless, classic and mature...could be read in acollege setting both for the craft itself and its unique brand of storytelling. The premise was brilliant" — Tabby A. Fae, My Trending Stories

• "...reminds me of books like The Hitchhiker's Guide to the Galaxy,Catch 22, and Spike Milligan's Adolf Hitler: My Part in His Downfall.If you liked those books, you'll love this one." — Dr. Bob Rich, Psychologist, Author

One Quarter Turn Beyond Vonnegut

Lacy Dawn is a little girl who lives in a magical forest where all the trees love her and she has a space alien friend who adores her and wants to make her queen of the universe. What's more, all the boys admire her for her beauty and brains. Mommy is very beautiful and Daddy is very smart, and Daddy's boss loves them all.

Lacy Dawn, the eleven year old protagonist, perches precariously between the psychosis of childhood and the multiple neuroses of adolescence, buffeted by powerful gusts of budding sexuality and infused with a yearning to escape the grim and brutal life of a rural Appalachian existence. In this world, Daddy is a drunk with severe PTSD, and Mommy is an insecure wraith. The boss is a dodgy lecher, not above leering at the flat chest of an eleven-year-old girl.

Yes, all in one book.

Rarity From The Hollow is written in a simple declarative style that's well- suited to the imaginary diary of a desperate but intelligent eleven-year-old – the story bumping joyfully between the extraordinary and the banal.

The central planet of the universe is a vast shopping mall, and Lacy Dawn must save her world from a menace that arrives in the form of a cockroach infestation. Look again and the space alien has made Daddy smart and happy – or at least an eleven year old girl's notion of what a smart and happy man should be. He has also made Mommy beautiful, giving her false teeth and getting the food stamp lady off her back.

About the only thing in the book that is believable is the nature of the narrative voice, and it is utterly compelling. You find yourself convinced that "Hollow" was written as a diary-based autobiography by a young girl and the banal stems from the limits of her environment, the extraordinary from her megalomania. And that's what gives Rarity From The Hollow a chilling, engaging verisimilitude that deftly feeds on both the utter absurdity of the characters' motivations and on the progression of the plot.

Indeed, there are moments of utter darkness: In one sequence, Lacy Dawn remarks matter-of-factly that a classmate was whipped to death, and notes that the assailant, the girl's father, had to change his underpants afterward because they were soiled with semen. Odd, and often chilling notes, abound.

As I was reading it, I remembered when I first read Vonnegut's "Cat's Cradle" at the age of 14. A veteran of Swift, Heller, and Frederick Brown, I understood absurdist humour in satire, but Vonnegut took that understanding and turned it on its ear.

In the spirit of Vonnegut, Eggleton (a psychotherapist focused on the adolescent patient) takes the genre and gives it another quarter turn. A lot of people hated Vonnegut, saying he didn't know the rules of good writing. But that wasn't true. Vonnegut knew the rules quite well, he just chose to ignore them, and that is what is happening in Eggleton's novel, as well.

Not everyone will like Rarity From The Hollow. Nonetheless, it should not be ignored. [by Bryan Zepp Jamieson]

Rarity from the Hollow by Robert Eggleton is the most enjoyable science fiction novel I have read in several years. Who could think of an intergalactic handbook for entrepreneurs? Who could turn a tree-hugger into a paranormal event of death-defying significance? Who could create characters so believable, so funny, so astonishingly human (and not)?

I put this book on my IPhone, and it followed me everywhere for several days. Strangers smiled politely at my unexpected laughter in the men’s room toilet stall. They looked away as I emerged, waving the IPhone at them as if it might explain something significant.

Oddly, the novel explains a great deal that has become significant in our society. Rarity from the Hollow is satire at its best and highest level. It is a psychological thriller, true to traits of mankind (and other species). It is an animal rights dissertation (you will laugh when you understand why I write that). It celebrates the vilest insect on earth (make that Universe).

The characters created by Robert Eggleton will bug your brain long after you smoke, uh, read the final page. Thanks for the laughs, the serious thoughts, the absolute wonder of your mind, Mr. Eggleton. A truly magnificent job.