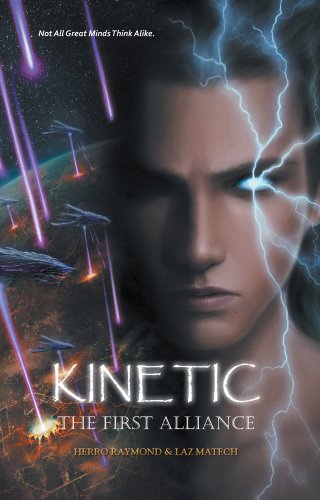 about this book: I'm really proud of this book, it has almost been a decade in the working. What I really wanted to do was capture real human confliction and inner turmoil. The story focuses on named Alexander Carter, a teenager growing up out of Houston, Tx with his only living relative Grandpa Henry. Alex's world is thrown into chaos when an alien breaks into his bedroom and demands he gathers his things to help fight off an impending alien invasion from a different world hell-bent on revenge. Forced to abandon the only family he has left, the alien makes him track down others like him who posses "kinetic" abilities i.e. electro, pyro, geokinesis, etc... Now it is up to him and 4 other teenagers to save and defend humanity from an intergalactic feud they originally had nothing to do with. Hearts will be broken and lives will be lost as these kids are forced to grow up in the harsh reality of war.

I came up with this idea because I've always really been into superheroes, they are the good inside all of us, and who we aspire to be. It's how I got the nickname "Herro" actually. It was really important to tell a dark and gritty story but not cap myself off from potential readers, so despite there being so much action and violence I think the book is appropriate for age 14 and up.

The book was originally called "Elemental Guild," and was designed to be a animated television show, but I quickly learned it is much harder to break out into the television biz than the literary world, so I gave it a shot and found a passion I never knew I had. We created a lot of imagery for this book because in my spare time I am an artist, but the real credit to our awesome cover goes to a commission artist who is talented to say the least.

I'd say the hardest part of meshing together my writing style with my co-author. We see things very differently but by the end of everything I doubt anyone will be able to tell where my writing ends and his begins. That is of course in thanks to the endless hours of research I've done for the book. I mean it... I can't even count how long I spent on the net to ensure everything I wrote was at least plausible if not factual. I don't like when fiction authors use sci-fi as a cop-out to just write things that don't make sense, so you won't find that in my book.

I learned a lot from writing, I discovered a talent I thought was non-existent, and I made some great friends in the process. Of course I've made my fair share of mistakes like what to spend money on and what is a waste, but I think I'm better for it. One thing I want to tell me readers is, thank you from the bottom of my heart for believing in my story enough to buy it. I do it all for you, and I hope to God you like it. Either way, keep an eye out for book 2 and 3 of the "Kinetic" series.